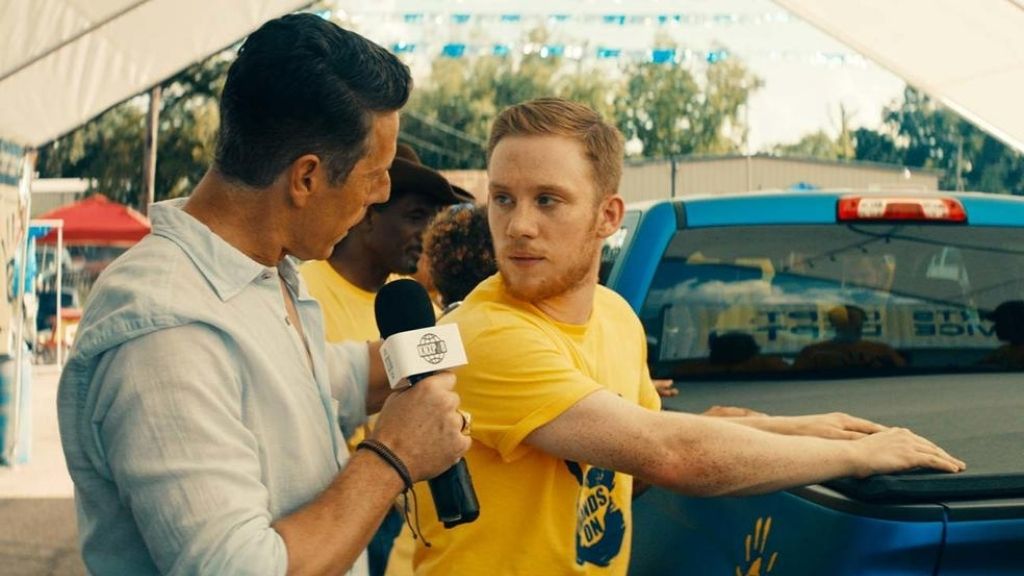 How far would you go for a truck?

For several contestants in the film One of These Days, they would endure blistering sun, sleepless nights, and all manner of taunting in order to win an expensive vehicle.

Based on a true story, this indie film revolves around Maria Parsons, a local woman in a small Texas town who sets up a “Hands On” competition with a few local competitors. The idea is simple – keep your hand on the truck you are going to win for as long as possible, with the exception of a couple of breaks. Take your hand off for whatever reason and you lose. As the minutes stretch into hours and gradually turn into days, all the aspirants compete not only with one another but with one burning question: what is the cost of winning?

Directed by Bastian Günther, One of These Days is a peculiar but ultimately gripping film. One of those incredible films that feel intimate with the ‘odd-ball’ characters on display in the heat of Southern American life. Tabet treats these varied and various people with empathy which proves to be a terrific asset to the watchability of the story.

British actor Joe Cole – whose filmography really is marvelously weird–is always great to watch. Here as Kyle, a young man intent on winning the truck for his young family, he’s pushed to breaking point. Cole really provides an effective portrayal of a somewhat humdrum man who buckles under the pressure of winning a truck that could turn his whole life around, effectively unraveling the character in these sun-soaked, sinister scenes. Carrie Preston is also tremendous as Maria Parsons, a salt-of-the-earth local celeb who has a variety of her own issues to deal with at the same time. Together, they genuinely raise the stakes all the more in the film.

One of These Days takes a bizarre final act detour that doesn’t necessarily fit in with the overall story or vibe of the film (but ironically, somewhat matches the tone of the true story on which it is based). If it had served to move Kyle’s backstory forward, then it most likely would’ve been more effective; ergo, more shocking.

Despite that, the film does, surprisingly, manage to keep its audience immersed in its effective-but-slow storytelling. And it certainly does a brilliant job at skewering our perceptions of competitions and how willing people are to humiliate themselves. Or, indeed, how others are happy to push and degrade people all for entertainment’s sake.

ONE OF THESE DAYS will be released in cinemas only from April 1st.