It’s good news regarding the adaptation of Patrick Ness‘ children’s “low fantasy” novel ‘A Monster Calls.’ Directed by Juan Antonio Bayona (The Orphanage) and produced by Belen Atienza (The Impossible, Pan’s Labyrinth), the actress Felicity Jones (The Amazing Spider-Man 2)  was quickly snapped up a couple of months ago to star in the film and the producers openly shared their interest in hiring Liam Neeson to take on the role of the titular monster. Now, just a couple of months later it’s a done deal and Neeson has been officially locked in to play the aforementioned role.

Set in present-day England, Ness’ novel follows 13-year-old Conor who finds himself serially visited by a monster bearing fairy tales dealing with courage, loss and faith in an attempt to help Conor deal with his mother’s illness and his bullying classmates. The original idea for the novel came from Siobhan Dowd who suffered from terminal cancer herself and had begun to write the story but sadly passed away in 2007 before being able to complete it.

A Monster Calls is slated for an October 14, 2016 through Lionsgate International in the UK.

Stone Me! The Flintstones Rocking Back to the Big Screen 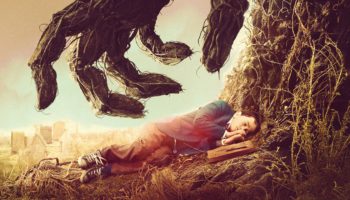