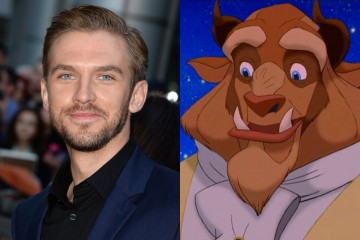 Since leaving Downton Abbey British hearthrob Dan Stevens‘ career has gone from strength to strength and has recently starred in such film as The Guest and Night at the Museum: Secret of the Tomb. With the way his career is blooming at the moment It would appear that Hollywood has also certainly fallen in love with him and if rumours are true, fans of the upcoming live adaptation of Disney’s beloved love story Beauty and the Beast will soon see Stevens take on the iconic role of Beast.

For those who are unaware of the timeless story, Beauty and The Beast is the story of Belle, a young girl who is dissatisfied with life in a small provincial French town. After her father Maurice takes a wrong turn in the dark woodsBell goes in search of him and discovers a monster-like Beast has taken him captive. Agreeing to take his place, Belle soon discovers that the Beast was once a prince whom is now under a magic spell that can only be broken by true love’s kiss.

We are excited by this news not only because we think Stevens is a terrific actor but he also comes from a background of theatre acting which we think will make him excel in the role. He will be joining Emma Watson (the Harry Potter franchise) who has been cast as Belle and action man Luke Evans (No One Lives) is also onboard as Gaston. It is also rumoured that Emma Thompson is in talks to play the role of the loving Mrs. Potts.

Congratulations from all of us here at Cinema Chords, Dan Stevens. We can’t wait to be your guest but in the meantime let’s all embrace one of the animation’s most iconic scenes.

[HORROR AND SCI-FI EDITOR] Jon Dickinson graduated from Sheffield Hallam University in 2006 with a Bachelor of the Arts degree in Communication Studies with an emphasis on PR and Multimedia. Since graduating he has contributed to several publications and regularly attends some of the biggest film festivals in the UK including Film4 Frightfest.
You might also like
HeadlinesNews