In a world of film that is filled with pointless violence and over exaggerated weapons, it’s hard to distinguish which are truly brilliant. Nevertheless, to celebrate the release of Machete Kills, we are here to give you the definitive top ten list of the most awesome weapons to grace the silver screen. 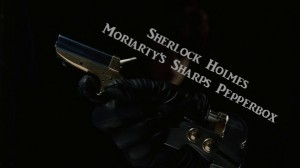 First on the list, Guy Richie’s wonderful adaptation of Arthur Conan Doyle’s famous franchise with the help of Robert Downey Jr, Jude Law and Rachael McAdams saw a impressive cannon of archaic guns, but one stood out above the rest. The Sharps Pepperbox is a shiny little thing that Moriarty whips out every so often from his concealed wrist, to impressive effect. This brass boss was actually first used in a 1988’s Sherlock Holmes: Hound of the Baskervilles, according to the Internet Movie Firearms Database (a nifty website which records all of cinema’s guns – www.imfdb.org).

Created by Dark Lord Sauron in the fires of mount doom, this bad boy can be used to enhance the wearer’s power to no end. It cannot take damage and can only be destroyed by the volcanic fires of where it was made. Although it has negative effects on the mortals and invisibility, for Dark Lord’s it is the ultimate evil power source and a worthy weapon indeed.

This gun gave birth to the iconic line ‘Say hello to my little friend’ which will be immortalized in cinema forever more. Scarface’s impressive gun manages to pick off numerous assassins; proving a customized grenade launcher is a gun not to be messed with, especially with Montana behind it.

Where would Jones be without his trusty whip and cowboy hat? Nowhere. Opting to not use the gun (most of the time) and going for a bit of whip slinging, Jones’ weapon is with him 24/7 and never fails him. Getting him out of sticky situations and whipping the bad guys into shape, this iconic weapon symbolises everything we loves about Harrison Ford’s character.

Ever since his inception in 1939 in Bob Kane’s DC comics, Batman has always had a range of brilliant weapons. The Dark Knight trilogy brought the modern gizmos to the silver screen and it did not disappoint. From Bruce Wayne’s Batcar, Bat-Helicopter and batarangs, he has every bat related weapon you’ll ever need.

Tarantino hugely popular film would not be complete without Hattori Hanzo’s sword. Claiming that is could cut God, this sword provided The Bride with enough power to kill hundreds of henchman and spill gallons of blood. The reason why the iconic fight scene at the end of Volume 1 was black and white? They ran out of fake blood and had to use coloured water. Now that is a lot of blood even for a mighty sword. 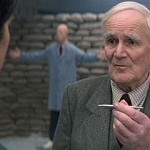 Well, where do you begin? With a very large array of gadgets, from both Bond and his foes, it’s hard to pick the best one. The golden gun is perhaps the cleverest, but Roger Moore’s Lotus submarine car is not one to forget, not to mention Connery and Craig’s Aston Martins; the Bond franchise is a treasure trove of innovative weapons.

Superman, arguably the ultimate superhero, also has a wonderful range of weaponry. His laser eyes, the fact he can fly and his body made of steel all culminate in the fact that Clark Kent is the ultimate walking arsenal. And to top it all off, his quirky kiss curl and iconic glasses make him humanly as well as powerful.

Well just missing out on the top spot is the ultimate weapon of mass awesome. This truly gigantic space station, which is no moon, can obliterate anything and everything it wants to. Nothing can beat this at all. Well, apart from a farmer in an X-wing and a convenient hole that leads to most fragile piece of the reactor. Nevertheless, you don’t get bigger and more powerful than this…. 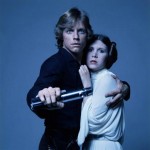 But you can get cooler. Yes, the Death Star can destroy anything, but what would you rather have? A lightsaber, defiantly. This beam of impenetrable light can slice through anything and everything and is most defiantly the piece of kit to grace any galaxy, however far, far away. The ultimate weapon and ultimately the most awesome.

And thanks scientists in America, it’s not long before one is made, according to the Guardian.

We’re sure that tomorrow’s release of Machete Kills will come packed to the teeth with a whole arsenal of crazy new gadgets and weapons. We’ll leave you with a taster with the film’s trailer.

[FEATURES EDITOR] Jack Amor is a full-time Star Wars enthusiastic, full-time film lover and part-time student. He likes to write about anything to do with cinema, but mainly thrillers, epics and a little bit of sci-fi. Jack hopes one day that someone will make a film about him, although it wouldn’t be very interesting.
You might also like
Movie Lists