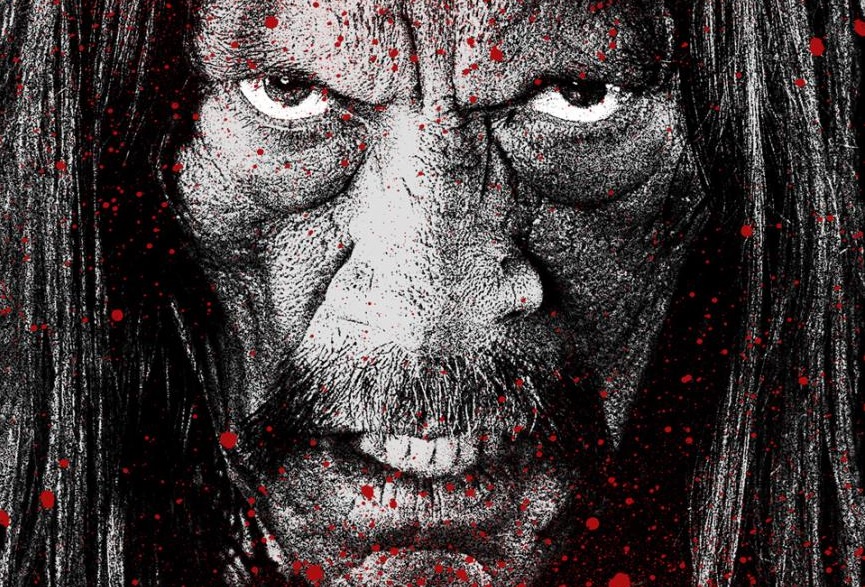 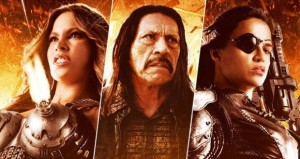 Machete stands as one of director Robert Rodriquez‘s more acclaimed films in his rather diverse filmography. Said film perfectly captured the low budget, trashy, and incredibly explicit style of many films of the ’70s and ’80s, meanwhile managing to be an incredibly entertaining spectacle within itself. Packed with gore, blood, guts and sex, many praised it for it’s enthusiastically cartoony style and pulpy consistency.

For the release of Machete Kills we spoke with screenwriter Kyle Ward as he reveals what we can expect from Robert Rodriquez’s newest film, out in cinemas next month.

So, how did you first become attached to the role of screenwriting Machete Kills?

I was initially approached by my agent. It was a process at first where Robert wasn’t sure he was going to direct the sequel.
He was just looking for someone to write it. Being a fan of grindhouse movies, and being a fan of the first Machete, and all of Robert’s movies, I just saw this as an opportunity to do something a little different. I raised my hand
at that point, they flew me out to talk with Robert who had a document with some broad ideas and we just started riffing. I think the first time we talked lasted about 3-4 hours. We were just brainstorming and riffing back and forth, throwing ideas
off the wall. Every idea got crazier, and crazier. And then it escalated and everything got far over the top, and that’s where we wanted it to be. 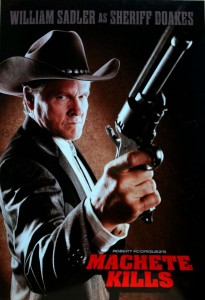 Obviously Machete, and a lot of Robert’s movies are quite satirical in their use of homage, reference, and casting of older veteran actors. Does Machete Kills follow this trend?

There’s definitely satire in the movie. For me it’s just having fun with that genre. Drawing from the old action films of the 70’s and 80’s, exploitation movies too . I wanted to go over the top, at the beginning, and keep going over the top. For me it’s one of those movies where you’re in on the joke, or you’re not.

Do we see the character of Machete change or develop at all, as we might come to expect from a sequel?

The thing with Machete, especially in this movie, is that you don’t have to weigh yourself down with character development.
We did play with some character ideas, and revenge arcs, and he definitely loses someone close to him at the beginning,
not to say too much. That being said, a big characteristic of those movies that I’m drawing from don’t arc. In the tradition of the genres I’m drawing from, the characters don’t change from film to film because audiences want to see that character in the same context.

Was writing Machete Kills a difficult task, or did you find it easier because of your enthusiasm for the project? Could you talk us through your creative process at all?

Absolutely, to be honest it was probably one of the easiest things I’ve ever written, and that’s because it was so fun to write. Just having watched those movies when I was younger, and when I started writing I dove back in, watching those movies again. Films like Coffy, Rolling Thunder, all the Grindhouse classics. When I got ready to sit down and open the front over, I just started writing and it just flowed.  All of these characters were larger than life, all of these crazy colourful characters, and they just leapt off the page. And that’s what I love to do. It was just fun. It was just a blast to write, all the way through, I think I wrote it within a month. Robert did have certain ideas, and we just took the blueprint, and worked off of that. He said here’s the ingredients, and with that we baked something cool.

So obviously you pulled from a lot of genres, could you tell us about specific influences for Machete Kills, and the general gist of the story?

In a general sense we pulled from those movies that were classified by sex and heavy violence. Just the crazy
stories they were about, and the wacky unpredictable plotting. They always had a low production value film to them. I just feel it’s the overall sense of that genre. We wanted it to feel like an authentic ‘Mexsploitation’ film. 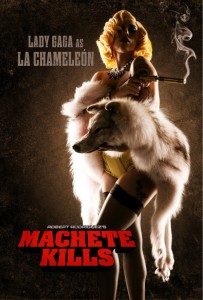 I personally pulled from a wide variety of movies that I love, for example Kubrick‘s Dr.Strangelove. I just said to myself ‘Okay, this is a scene from a movie that I love, how can I do a similar kind of thing, and plug it into this crazy grindhouse movie that we’re doing.’ The challenge would be doing the weird over-the-top version of that; flipping it, and putting a spin on it. For Robert he would reference that he wanted the first half of the movie to feel like ‘An ’80s Rambo movie’, where Machete would find a fugitive and get him to the border. So the story would be this action-packed ’80s movie, and gradually it’d bleed into this wonky kind of ’70s science fiction story – Moonraker was thrown around a lot as an inspiration.

A sci-fi movie!? Moonraker!? Machete in Space!? Care to elaborate on that slightly?

So, when I first saw Robert’s From Dusk till Dawn I was in high school. When the movie first starts, it’s a crime movie. Then by the end, we’re in a vampire movie. How did we get there? That’s what we tried to replicate, at first. The president gives Machete a mission and by the end of Machete Kills, we’re in a wonky 70’s sci-fi movie, hence the Moonraker reference. It’s one of the most over-the-top things I’ve ever done. The third one is going to be called Machete Kills Again…In Space? It does sound crazy, but the third one is going to take part in space, and Machete Kills is the bridge which sets up how that’s going to happen.

A cliché question I know, but one I always tend to ask: What are some of your favourite movies?

Apocalypse Now, I still love E.T to this day, I love Scarface, I love Godfather 2. I’ve always loved Carlito’s Way, it doesn’t get as much appreciation as it really should. That was a big one for me. My taste is everywhere really, just name a genre and I could give you my top five.

How did you get started as a writer, and when did you first realize being a screenwriter was what you wanted to do?

I knew that from a very early age I wanted to tell stories. I was always writing short stories. I would day dream, drifting off in class scribbling comic book stories. Then I engaged with film at around the fifth or sixth grade, I started going to the movie theatres religiously and kind of became a student of film. By high school I knew for definite. I didn’t know how I was going do it, but I knew. How a story evolves from the script to the screen was what really drove me. I loved movies and wanted to tell stories, and knew I wanted to be a writer, and the two became intertwined. Then I moved out to L.A and was determined enough to make that happen.

What was the first real project you worked on? 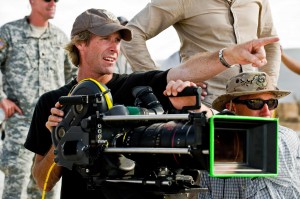 The first real project I did was called Fiasco Heights, that was a script I sold to Universal in 2007, with Michael Bay attached to produce. It got compared to Sin City, and was mainly based on all of those short stories I wrote. It was kind of cool to base something on things I’d written ten years earlier and be able to sell it. It was like film noir on speed. I was a big film noir fan. It was also inspired by those buddy cop movies, Lethal Weapon, etc. It was like ‘I’m going throw Lethal Weapon into the blender, with Out of The Past, and see what happens.’ That was the first one for me, got me in the door, got me working.

Would you like to direct somewhere down the line, if given a chance?

I’d love to direct later in my career, down the road. I’ve definitely considered it and I think that’s a goal for me. I’m currently happy writing and it’s still a learning process. It’s been great because it’s opened that window, you see all the great new actors and how they handle your story. I kind of think I write like a director – I see the movie, visualise it in my head. So I know I definitely want to be behind the camera, but for now I want to absorb from directors, see how they make their movies, and learn that process.

What are you currently working on now?

I wrote a movie recently called Kane and Lynch, the thing I’m working on at Universal is called Arabian Nights. It’s a story based on a lot of lore from Aladdin, Sindbad, all of those characters. It’s a merging of all of those stories heavily based on Arabian lore and is a big, fun project for me to do.

We’d like to thank Kyle for his time and urge you all to catch Machete Kills when it launches in UK cinemas this October 11th. In the meantime we’ll leave you with the latest trailer for the film: 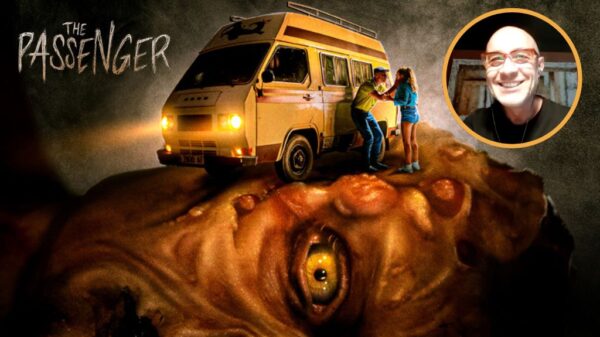 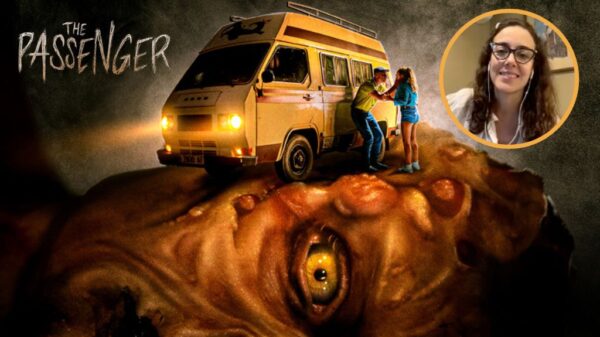 Fans of creature features are in for a treat as Dark Star Pictures and Bloody Disgusting released the sui generis Spanish shocker The Passenger... 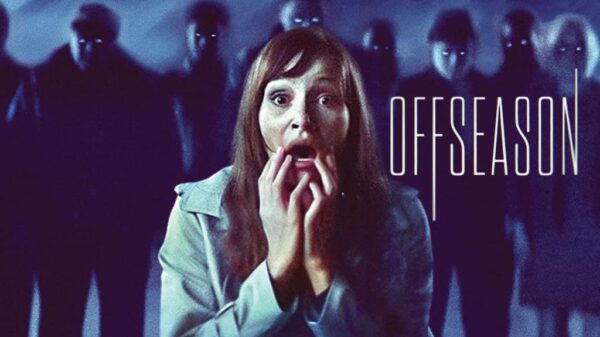 Having made an impressive mark on critics and audiences alike at last year’s SXSW Film Festival World Premiere, and subsequent screenings at the Philadelphia... 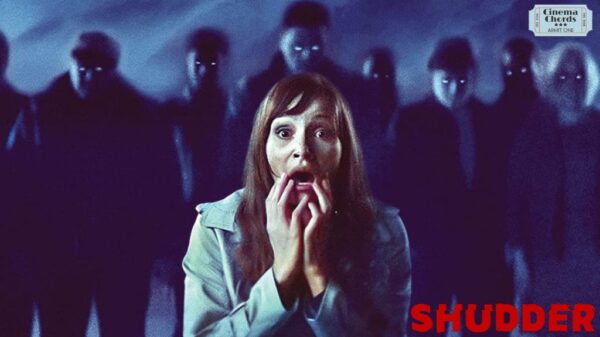