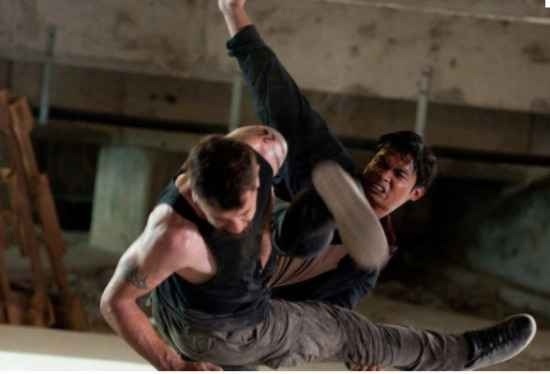 Tony Jaa (Panom Yeerum) first made a real name for himself ten years ago as Ting, heading off to the big city to recover the stolen head of his village’s sacred statue.

That was of course Ong-Bak, which, whilst lacking any plot whatsoever, was one of the best choreographed martial arts films of its time. The buzz from that film swiftly lead to Jaa galavanting off to receive yet another unusual artifact, a stolen elephant, in Tom Yam Goong (The Protector).

Whilst the aforementioned films featured some amazing choreography at the hand of director, Prachya Pinkaew, Ong-Bak went on to spawn two sequels which sadly failed to pack anywhere near as much punch as the original.

The Protector now gets a sequel as Jaa and Pinkaew reteam to provide another dose of maniacal martial arts. Based on the first trailer, it certainly looks like this sequel could provide the goods we were all hoping for from the Ong-Bak franchise as we find Jaa evading the police, for a crime he didn’t commit, whilst getting caught up in an underground fighting ring. In case you were wondering about the elephant, don’t worry, it will be making an appearance as it gets stolen again, playing the catalyst to the sequel’s mayhem.

A welcome addition to the franchise is RZA (G.I. Joe: Retaliation, The Next Three Days) who will be playing a crime lord with a penchant for collecting international martial artists for his underground fighting ring.

Enjoy the trailer below packed full of the crazy choreography we’ve become accustomed to with Jaa. As a side note, if you’ve ever wanted to know what it would feel like to get a Jaa fist in your face, fear not as The Protector 2 is reported to be getting the 3D treatment.

Boss Suchart is the influential owner of a major elephant camp. When he was murdered in his own home – the killer delivered three fatal blows on his body – all evidence points to KHAM (Tony Jaa), present at the crime scene and seen with the victim the moment before he died. Kham is forced to run as the police launch a pursuit. In addition, Kham is drawn into an underground fighting ring run by LC (RZA), a crime lord who’s obsessed with collecting top-class martial artists from around the world.

The Protector 2 is slated for a VOD release on March 27th with a limited theatrical release in the US from May 2nd. As soon as a UK release date is confirmed we shall let you all know.