Over the last couple of days Paramount has been reported to have registered various domain names for Transformers 4 and the sequel’s official name, Transformers: Age of Extinction, has now been revealed in the form of a teaser poster.

With all the sand enveloping the logo this is more than a dinosaur sized hint that prehistoric robots (Dinobots) will in fact be added to the equation. Said Dinobots were hinted at in a recent Google translation of an interview from Beijing News with the film’s producer Lorenzo di Bonaventura which ran as follows:

“Lorenzo: I can not disclose the specifics, but it can be sure that the machine will give the audience join the dinosaurs bring new excitement. After seeing the film the audience will find that this will be a greater integration of various aspects, such as the previously separate human and car people will do with integration.”

Transformers: Age of Extinction will be the fourth and final film in the franchise directed by Michael Bay before he hands it over to an as-yet-unknown successor. The only other source of information regarding the content of Transformers 4 is from Bay himself who claims:

Interestingly, last weekend a television reality show, called Transformers 4 Chinese Actors Talent Search Reality Show, set up by Paramount Pictures in collaboration with Jiaflix and the China Movie Channel, selected four supporting cast members via a contest which was opened last April to both professional and amateur actors, bringin in over 70,000 hopefuls. Amongst the judges were the film’s producer Di Bonaventura, the marketing and distribution chief for Paramount Megan Colligan, former head of the Academy of Motion Pictures Arts and Sciences Sid Ganis and vice manager of the Movie Channel’s web site M1905.com, Liang Longfei.

A major reason behind said casting is that the film’s producers are putting all their efforts into boosting the movie’s profile in China, looking to include enough Chinese elements to ensure it qualifies as a Sino-U.S. co-production, whereby allowing it to bypass the Chinese import quota and pull in a larger share of box office earnings.

Transformers: Age of Extinction is slated for a 10th of July, 2014 UK release date. We’ll leave you with the aforementioned teaser poster which you can click on for an enlarged version. 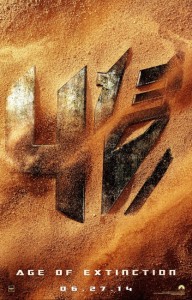