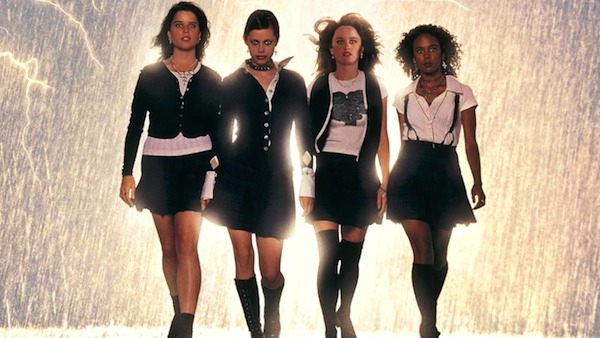 Be careful! Something wicked this way come! The covens have opened and the swarm of broomstick riding cackling heathens have come upon us. That’s right, it’s the Season of the Witch (and we’re not talking that terrible Nicholas Cage movie). From Hermione in Harry Potter to the girls in American Horror Story, the media isn’t short of a magical pointy finger or two. When it comes to casting spells or bewitching minds, the girls have it down. But what are the best movies with wicked witchy women? Well, here they are..

One of the movies of the 1990’s that sparked a generation of girls into believing that “stiff as a feather, light as board” would raise your friend to the ceiling and give you cramp in your fingers. Sarah Fairuza Balk, Robin Tunney and Neve Campbell, it centres on a group of girls who dedicate themselves to Wiccan arts a coven. When Sarah, a transferred girl, arrives as a new member of the group, they find that she is the missing powerful link. And soon they are all dabbling in spells beyond d their control, consumed by the spirits within them. It has quickly become a cult classic and in many ways, it is stellar (if a bit cheesy). Fun fact though, Fairuza assisted the filmmakers when making the magic element feel more natural and realistic as she is a Wiccan too.

One of the few movies that is supposedly for children but actually mentally scarring. A lot of that is down to the impressive make up effects and puppetry from none other than Jim Henson’s Workshop. That’s right, the crew behind the cuddly Muppets and Sesame Street has infiltrated your nightmares more so than Labyrinth. The actual story from Roald Dahl is terrifying too, based on a tale about witches who conspire to kill children because they can’t stand us. In this, boy Luke is transformed into a mouse when he stumbles on a convention for Witches. Yikes. It’s scary and memorable, ripped straight from the darkest corners of our minds.

Can we mention this one? After all, the fabled witch is never seen but alluded too. Yet it is the immensely ingenious independent feature that has been seared into our minds forever. Starring unknowns and the predecessor for found footage films, The Blair Witch Project centres on a group of students who want to unearth the myth of the Blair Witch only to find that the legends maybe true. Possibly a movie that is the perfect example of how to set tension, The Blair Witch Project really enhances the terror of imagery and the unknown frights.

Gypsy witches are stereotypically the worst. They are the one that curses you if you make one tiny mistake and that curse is a bombardment of insanity and hell. Pretty much exactly what happens in Drag Me To Hell. Christina is an loan officer who through encouragement to be stricter from her boss, accidentally refuses aid to Ms Ganush; a woman who then promptly decides to put a curse on Christina. With the gates of hell literally opened for the poor woman, Christina is plagued by demons who want to literally drag her to hell. Uh-oh. One of the few genuinely petrifying movies of recent years.

This movie will sink into your brain and never let go. Starring Jessica Harper, more famed for Phantom of the Paradise, as a prestigious ballet dancer who gets accepted to one of the best schools in the country only to find that it is inhabited by supernatural goings on. It is one of the most intense and surreal films of all time. Highly disturbing and made by one of the best Italian horror directors of all time Dario Argento, Suspria is an intensely brilliant movie that will linger, like a hazy gory spell, long after viewing.