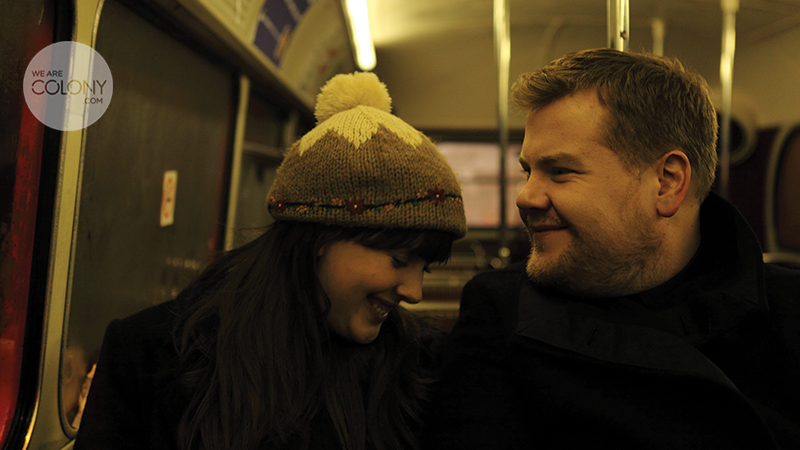 They say that Paris is the City of Love, filled with the delicate French melodies travelling down the Seine and blinking lights like pulses aflame underneath the Eiffel Tower. They sometimes say that New York is the greatest city; never sleeping yet caught in the labour or romance as couples entwine like a Broadway Musical. Maybe the best cities for love is Rome, Brussels, Prague or Venice.

No. The city of cobbled streets, rich in history and the hum of Red Buses is where true love is found: London. None of that is more apparent than in Chris Foggin’s short That Night.

Starring James Corden and Alexandra Roach, That Night revolves around an unnamed man and woman who bond on an empty bus in London. She, being new to London from her home town in Swansea, inevitably winds up lost. Spurred on by the instant connection, he decides to help her and the two walk off around the twilight of the Capital.

This is a genuinely tender quixotic short. Though it captures some essence of Richard Curtis romantic comedies such as Love Actually, Foggin is fully aware to never let the film topple over into the over-sentimental cheese. Here, thanks to the writing and the undeniable chemistry of our leads, it is charming and human. It bounces with this delicate yet visceral story that you invest in instantaneously. That Night never falls into clichés either. Instead, it allows the dialogue to drive the story forward and enthuses a quality that is automatically compelling.

Using the vibrancy and scenery of London to enhance the story, Foggin adds another layer of near magic to That Night. Utilizing the famous brightly lit site to backdrop a rather exquisite and delicate love story, the film is stunning in its aesthetics. But really, the true depth of the short centres on the acting. Relative newcomer, Roach is stirring and witty, allowing us to instantly like her character as he does. Corden bounds with this personal and charismatic character. Yet together, the movie sparks with this intense first attraction and their chemistry really pulls you along, keeping the beat moving at a rather lovely pace.

If there ever were a short film to capture the soul of London and coerce a smile, it’d be That Night. Foggin has woven a pleasant and enchanting film here.

That Night will be showing on We Are Colony.  We Are Colony is a new VOD platform for independent film, connecting passionate fans to great filmmakers by creating a ‘special edition’ release, bundling the film with exclusive additional and behind-the-scenes content.  The platform launched in a private invite-only beta in June 2014, and has welcomed users from over 90 countries in its first month.  Readers can request a priority invite by signing up at www.wearecolony.com and using the code “Cinema Chords”.