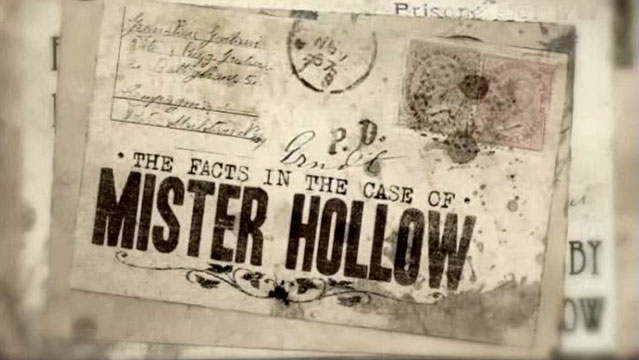 Have you ever looked and an old Victorian photograph and instantly had shivers trickle down your pine? Maybe it’s the sepia tone or perhaps it is the tinge of ghosts that no longer walk this Earth that star dead eyed into your soul as if they were right beside you, whispering the past into the your nightmares. The ghoulish apparitions that seem to perforate in the background spindle all your fright into a ball and you are either sucked further into the ghouls at centre stage or you have to pull away, chilled at the thoughts haunting your mind.

This notion is played really well in The Facts In The Case of Mr Hollow. Taking a massive liberty with how you can view a photograph – in this case, presenting it more as a tableau than anything. Drenched in sepia tones, it depicts a brand new family parked outside a church with a child in tow. Using the lens of the camera as a magnifying glass, we are invited to view each aspect and dimension of the photography where the sinister truth is slowly being revealed.

The Facts in the Case of Mr Hollow is an outstanding and original take of the horror fare that still sends homage to the genre, with nods here and there. The set up and the gradually changing characters despite their supposed stillness, really unveils in this unique and stirring way. Co-directed and written by Rodrigo Gudino and Marco Pecota, the spiralling tension and fear for an effective film. The music adds a layer of suspense that curdles in your stomach with this dull sense of dread. The impending shock, fear and fright is very much akin to those idiotic “find the mistake” screamer puzzles online but it is developed really well here. It’s creepy, innovative, and wholly fantastic.