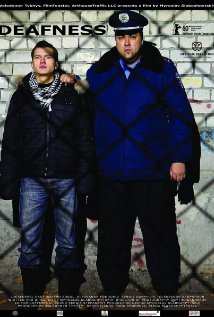 There are a lot of movies out there that have people hyped up and talking. At the moment, Mad Max is the driving force of cinema – with people’s minds literally exploding and that’s the likes of critics such as Peter Bradshaw, Robbie Collin and literally everyone at Cannes who emerged like sweating beasts aching to see more. But much quieter, silent in face, that has tongues wagging in revered awe is the excellent Ukrainian film The Tribe. The film revolves around deaf children who aren’t translated through subtitle, and sees how they evolve in a Lord of the Flies manner as they are abandoned at a boarding school. However, this isn’t the directors first departure into deafness as the core of a film – which he explored in 2010’s Deafness.

Deafness by Myroslav Slaboshpytsky revolves around a deaf group of school children, outside their whose leader is taken into custody by the police sergeant. However, the policeman is definitely going to assert his authority in the a terrible way.

Surprisingly, it’s the sounds in this deaf drama that ironically make it more crucial. Pivotal. Not bogged down by the dialogue, this is an evocative short film that makes you aware of the heightened sounds around you. Utilising this atmosphere Slasboshpytsky lays the groundwork for his incredible recent film The Tribe. The words that don’t fall from the lips but are untranslated as fingers hits palms highlights more to the hearing world than any overspoken piece ever could. Whilst you may not fully understand what they are saying (and nothing is stopping you from learning), you are still aware of the visceral emotion and the story as it is translated gloriously well.

The only slight bit of confusion and contention is that this film came out in 2010 yet feels like the eighties and the story isn’t developed well enough to fit into a short film. And sometimes the police officer ridiculously overacts which detracts from the overall product of the film. Yet if you enjoyed The Tribe or are intrigued by the concept than this is a brilliant jumping off point on how to develop such a film.

You can watch it here.