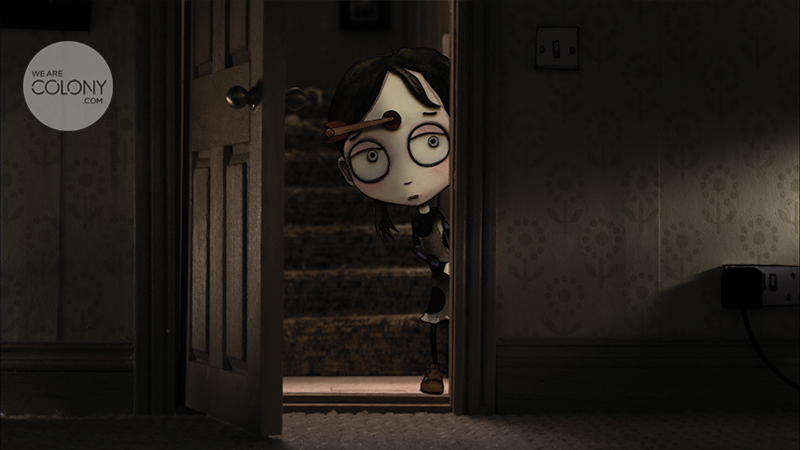 There are many PSA’s and adverts that inform audiences globally about the harrowing effects emotional, verbal and physical abuse has on children. Yet, despite the jovial soundtrack and the jaunty figures on screen, there hasn’t been one as devastatingly real as Being Bradford Dillman. This surreal cut up of animation and live action settings has a similar impact, but by pulling you in to the unique yet crude cartoon figures prancing about, only to hit you with its underlying message, makes Emma Burch and Peter Williamson’s short an effective, powerful piece.

Molly is a timid young girl who is tentatively picking up the fragments in the household left behind by her drunken Mother. When she comes home from school, after being bullied by boys and hoping that they’d all die, Molly’s mum tells her (heavily under the influence) that she used to be male and kept the severed genitalia in a box. Though the story is ludicrous to many adults, it is swallowed as verbatim by Molly and soon she is imagining Bradford Dillman, the incarnation of the boy she could have been. As he helps her throughout the little tragedies of life, could Bradford be a new turning point for the shy daughter and the alcoholic mother?

Burch and Williamson’s evocative tale is visually engrossing. Having a specific and unique flare in its style (that can be likened to a Tim Burton version of Charlie and Lola but I believe it has an originality to it), Being Bradford Dillman is steeped in stale colour palettes used to submerge the audience into quite a disturbing world for Molly, despite her general gaiety. The core message here is the selfish and indulgent nature of Mother’s drinking habit that directly harms and pushes Molly further into her imagination. The desperation of a child to cling to a boisterous imaginary friend that appears whenever mummy over steps a line is poignantly and sensitively handled in a way that hits you fully.

The unnerving aspect of Being Bradford Dillman is the narrative and everyday life that Mum spouts. The guilty abuse that she piles onto her daughter with this soft tone is horrifying. Little verbal nuances such as threatening suicide and accusation of lies when she cannot remember what drunken slur she has said, ripples this intense atmosphere that is juxtaposed against the animated nature of the film. The effect is shocking and that is inherent to the message being conveyed. Written eloquently and considerately, Being Bradford Dillman is a commanding short.

Being Bradford Dillman is now available on We Are Colony