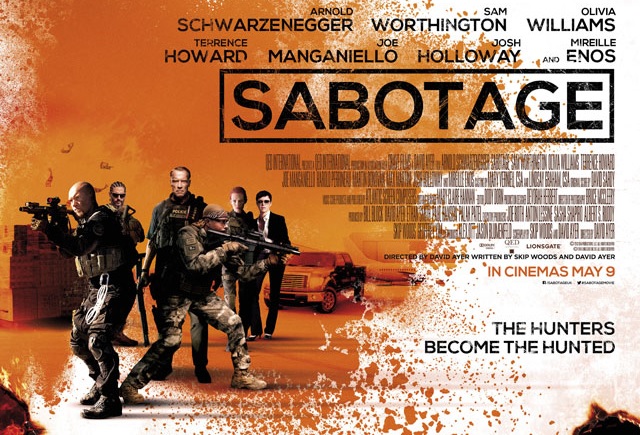 Listen all Y’all, it’s a sabotage!

I’m going to cut to the chase to describe my anticipation for Arnie’s latest project, Sabotage, helmed by End of Watch director, David Ayer. Based on the trailers so far this looks like THE ultimate ’80s action movies genuflection. Have a sit down Expendables, take a breather John McClane, there’s a new gang in town.

What’s not to look forward too? It’s got two Terminators (Arnold Schwarzenegger and Sam Worthington), the amazing Mireille Enos taking a serious about turn from her break out role in the recent hit series, ‘The Killing’ and Josh Holloway who’s most recently wreaking havoc as the Watchdog-esque action hero, Gabriel Vaughn in ‘Intelligence.’

With a plot that repeatedly has me thinking Commando for the new generation, Lionsgate have got a real treat in store for us. So with just a couple more months to wait, a brand new UK trailer has just been unleashed along with the above new quad poster.

Sabotage also stars Olivia Williams, Joe Manganiello, and Terrence Howard and is all set to explode into UK cinemas 9th May 2014.

Filmmaker David Ayer, acclaimed for his gritty and realistic portrayal of life behind the blue line in End Of Watch, reinvents screen legend Arnold Schwarzenegger, as he directs SABOTAGE, an action thriller that follows one of the best assault teams on the planet, an elite special operations team of ten DEA agents.

The elite team executes what appears to be a tactical raid on a cartel safe house, which in fact, turns out to be an elaborate theft operation, pre-planned by the members of the DEA squad itself. After hiding $10 million in stolen cash, the rouge agents believe their secret is safe – that is until someone begins methodically assassinating members of the team, one-by-one. As the body count rises, everyone is suspect, including members of the team itself.