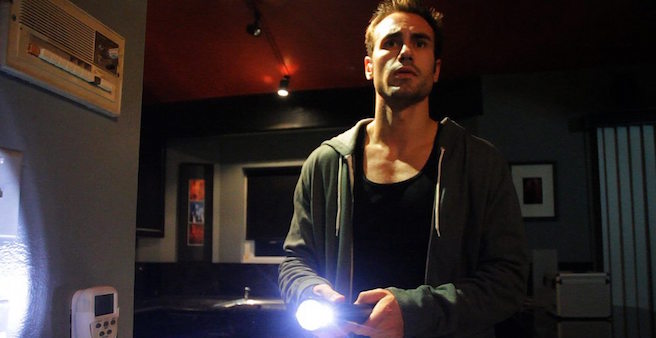 You have to hand it to It Watches. Not many films would dare to do what this film does and that is openly lie to its audience. We can all appreciate a bit of director manipulation and it’s perfectly acceptable for a film to trick you into thinking the story is going in one direction, before it steers you into another. I love a good twist as much as the next film fan. What I don’t love, however, is when a film’s twist ending reveals that prior scenes would not make sense in the context of this supposedly concluding revelation. That’s when you lose me. A great twist neatly ties together the complete narrative in a beautiful little bow; think Shutter Island, Memento and Identity, which are all classic modern thrillers with a mind-blowing twist ending. The ending of It Watches leaves gaping holes in the film’s story, revealing a narrative that was little more than a fabrication and rendering the entire watch pointless. Never would we have been able to work out this film’s truth, because it was impossible. It Watches is not a film that can be enriched on further viewings and if you were to visit it again it would probably only heighten your frustration.

Aside from the film’s agonising ending – which I could probably rant about until the end of time – there is a heap of other problems within It Watches‘ short run time. The bluey-grey colour palette the film adopts is uninspiring and predictable; with no visually creative flair visible during the film. For a film that tries so hard to be complicated, it would have been impressive if this drive to be creative had been transferred to the stylistic elements, too. The mixture of found-footage and traditional filming is a head-ache, with no reason for the hand-held style at all. This is a prominent problem with many found footage films that give no explanation why the protagonist(s) are filming. At first Andre states that he’s filming a birthday video for his Grandma, but after this it’s pretty unnecessary. Andre doesn’t go to the house expecting it to be haunted and as far as he knows, it’s just a house. Pretty boring, so why are you filming, Andre? The choppy changes to normal filming also hinder the enjoyment, because many scenes just follow and shoot Andre while he’s filming. Again, that’s pretty boring. If there’s going to be a mix between filming styles then it has to be interesting or add something to the film. Here, it’s incorporated for no clear reason and becomes just another one of this film’s gimmicks.

By now, we’ve had about half an hour of Andre’s tiresome tour of the house with complete narration. Ivan Djurovich isn’t too bad as the leading man and does well to carry the entire, albeit poor, film on his shoulders. His characterisation is actually the most understandable part of this film. His amnesia does add an interesting layer to the film and it would have been beneficial if the film had removed many of the included distracters and focused entirely on this simple element. Instead, we have a director in Dave Parker who is keen to hold up many smoke screens to ensure his audience can’t figure out what’s really happening. It works, so congratulations for that I suppose. It is a shame that It Watches delivered so little and became a frustration, because Parker’s Sweet Tooth segment in Tales of Halloween is probably the strongest out of the 10 stories; embodying a great ‘80s throwback vibe and an effortlessly creepy thread throughout its tale.

Now it’s time for the “supernatural” goings-on to begin, right?Sort of. The house is filled with the various body parts of mannequins (why? I don’t know, add it to the red herring list), so they start expectedly moving around and what-not. Again, when the “truth” is revealed, this all seems sort of weird and unexplained. Andre also invites a lady friend over, who he’s had a date with before but can’t remember because of his amnesia. Add this to the red herring list, because he’s sure to have done something memorable on their last date, right? Then a crazy dude comes round and starts spurting nonsense about the police ringing him up to warn the neighbourhood about a set of escaped convicts. Yep, add this to the red herring list. He then starts acting seriously crazy and asking Andre’s lady friend about their sexual activities while Andre is out of the room. This is your film in a nutshell. After all this happens, we get the big reveal and the explanation. Which I hated, by the way. Did you get that?

As you can tell, I was not a fan of It Watches and maybe my disappointment stemmed from it not being a sequel to It Follows. We all want It Follows Too or It Still Follows, right? Make it happen. Anyway. Avoid this. Should have been called Do Not Watch.