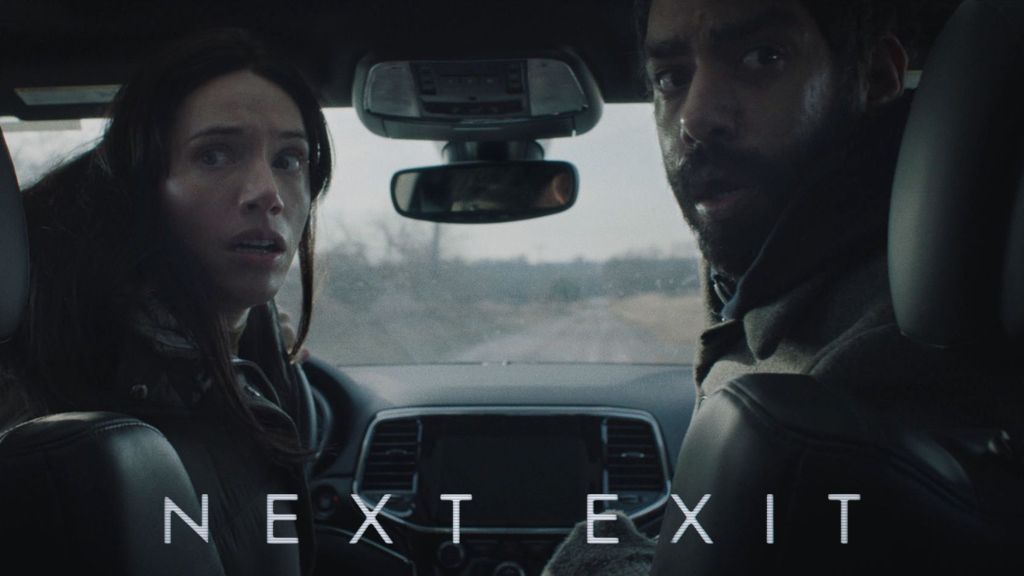 People often tell you to live your life as if every day were your last, but how would that mantra hold up if life after death were substantiated by science? That’s exactly what writer/director Mali Elfman postulates in her feature directorial debut and, contrary to the kind of reactions you might expect to hear and see in the wake of hard evidence that an afterlife exists, Next Exit stands all likelihood on its head, inspiring viewers to make the most of our ephemeral existence.

When footage of a ghost caught on camera is substantiated as bonafide proof that human death can be transcended, narcissistic Dr. Stevensen (Karen Gillan – Oculus, Gunpowder Milkshake, Dual) launches a contentious research initiative offering volunteers the opportunity to sacrifice themselves in the name of science, safe in the knowledge that an afterlife exists. Society’s new-found lust for the afterlife throws Teddy (Rahul Kohli – “iZombie,” “The Haunting of Bly Manor”) and Rose’s (Katie Parker – Absentia, “The Midnight Club”) fates together when their transport to the “Life Beyond” research centre is double booked and, much to their chagrin, they are left with no choice but to humorously quarrel their way to the facility on the other side of the country.

As the two head out on their death trip with intoxicating anticipation rather than fear, Elfman’s script brilliantly navigates a complicated line between realism and fantasy with resounding sensitivity as both Rose and Teddy find themselves reckoning with what is really driving them towards their respective transitions.

Parker and Kohli put in hands down two of best performances of the year. Their chalk-and-cheese chemistry is as grounded and pragmatic as it is intense and emotional, with both actors shouldering an equitable share of the film’s keen comical levity amidst such stark, potentially triggering subject matter. Whilst Rose sees her ticket through the pearly gates as an escape from the ghosts of her past and Teddy sees it as a chance to finally make something out of his life, the disparate duo clock each other’s misguided intentions and end up becoming perfect demon-exorcising sparring partners, spurring each other on to do things they wouldn’t have dreamed of doing previously.

Ultimately, this parallel psychological journey the film takes the protagonists and the audience on digs deep beneath the surface of the complex, and often misunderstood world of depression, grief and suicide, addressing all of these themes with a keen sense of delicacy, poignancy and humour.

Next Exit is hands down the best debut feature this reviewer has seen in years. It packs a bold, dynamic and optimistic punch, marking the arrival of an exciting new filmmaker.

NEXT EXIT releases in theaters and on demand on November 4, 2022.