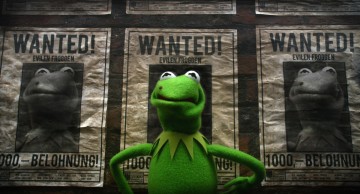 Yes that’s right, some more Muppet madness has come our way in the form of a new trailer for Muppets: Most Wanted featuring some ‘most wanted’ covert cameo appearances.

However, before we get down to that we thought everything needed to be put into perspective in the form of a trip down memory lane. So let’s remind ourselves just how long Ricky Gervais has been waiting for his moment to star alongside the Muppets, despite a few spacebars between them and his good self (you’ll understand when you see the trailer). Take it away Gareth.

Now we’ve got that out of the way and wiped a few tears from our face either from laughter or from sadness on remembering how much we all miss The Office the good news is we can all look forward to Disney’s Muppets: Most Wanted.

Blasting back onto our screens after the 2011 smash-hit The Muppets, each and every one of our favourite characters are back, together with an all-new Kermit dead-ringer, Constantine, in this madcap globetrotting spy thriller.

As you’ll see in the trailer below, aside from the Muppet bunch, the film is jam packed with covert celebrity cameos together with star turns from the likes of aforementioned Ricky Gervais, Tiny Fey and Ty Burrell. Muppets: Most Wanted finds the Muppets on a worldwide tour, making pit stops in countries as far afield as Berlin, Madrid, Dublin and London only to find themselves unwittingly entangled in an international crime caper headed by none other than a Kermit lookalike, Constantine, the World’s Number One Criminal.

Muppets: Most Wanted is directed by James Bobin who also co-wrote the film with Nicholas Stoller. You’ll also be ecstatic to hear that Flight of the Conchords songwriter Bret McKenzie has scored music for the film.

Muppets: Most Wanted will be storming into cinemas March 2014 and we’ll leave you with the trailer.

[FOUNDER & EDITOR-IN-CHIEF] Graduating in Psychology longer ago than he would care to recall, as well as Editor for CinemaChords, Howard is also the Web Editor for Tom Holland's Terror Time and his words can also be found at various popular film publications including Blumhouse, Dread Central, Shock Till You Drop, Rue Morgue, SCREAM: The Horror Magazine and TheHorrorShow.TV.
You might also like
Trailers