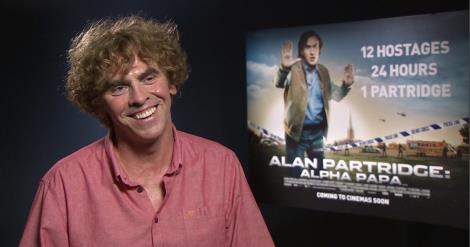 Declan Lowney, Wexford born director, cut his teeth directing music videos, television and even went on the helm a Eurovision song contest in Birmingham back in 1998. Probably his most memorable output to date were two seasons of Father Ted and more recently his direction on Little Britain and collaboration with Chris O’Dowd on the first season of acclaimed comedy Moone Boy. Lowney got his first Partridge hands on experience in 2012 for the Alan Partridge on Open Books with Martin Bryce TV special after which he came on board full time to help bring Norfolk’s favourite DJ to the big screen in Alan Partridge: AlphaPapa.

Lowney was good enough to sit down and speak to us all about the secret to making an audience laugh, Partridge’s influence on British comedy and why he looks twenty years younger now than he did twenty years ago…

Apart from great jokes, what do you think makes a really good comedy film?

Story, I would say. The story of Alpha Papa feels real – a siege at a radio station is something that could possibly happen.  You’ve got the seriousness of the situation, the events of the story, and the comedy layered on top of that.  This is something new for Alan, and because the story is so tense, he became a bigger character to make the comedy work.

What was the best part of making the film?

The relief when it was over!  The best aspect of it was seeing the film when it was finished.  It took a long time to evolve, and making a film like this is, in fact, intensely hard work, but it was a joy to see the final product and to realise how funny it turned out to be.

Was there room for improvisation on the set?

Steve did some improvisation sessions many months before we were shooting, but it was almost all on the page by the time we did it.  Having said that, one of the best scenes in the film came when Steve said he wanted to try lip-synching to a song.  He did three takes and it was brilliantly funny.

Does Alan start to feel like a real person when you spend a long time with him?

The lines can become blurred, but comedy acting is not like method acting, although when Steve puts on the wig it completely changes him.  Sometimes it was strange to see Alan Partridge talking to me but to hear Steve..

Alan looks younger now than he did twenty years ago.

I think Alan has become more comfortable in his own skin as he’s got older.  He’s not desperate to make it, as he was back then.

Is his relationship with Lynne an important element of the film?

I think it’s vital.  At the end of the film he redeems himself when he hears Lynne’s truthful words.  They have a fantastic relationship and it’s lovely to see the audience reaction when she appears.

Do you think Alan had an influence on characters like David Brent?

I do think Alan opened the door for David Brent.  I don’t know what Ricky Gervais thinks, but to me they are very similar characters.

How did the look of the film evolve?

Almost accidentally.  I shot the film in sequence and we might have been a bit staid in our approach at the beginning, but as we went on we loosened up and started using hand-held cameras, and there were long, loose takes, so Steve had the freedom to go wherever he wanted.

How was the premiere in Norwich?

Nerve-wracking.  It was the first glimpse of the public’s sense of the film and we got an incredibly warm response – thousands turned out on the day.  Bringing Alan Partridge back to Norwich was a little bit like bringing The Beatles back to Liverpool…

Many thanks to Declan for talking to us.  Alpha Papa is out on the 7th of August and we’ll leave you with the trailer…