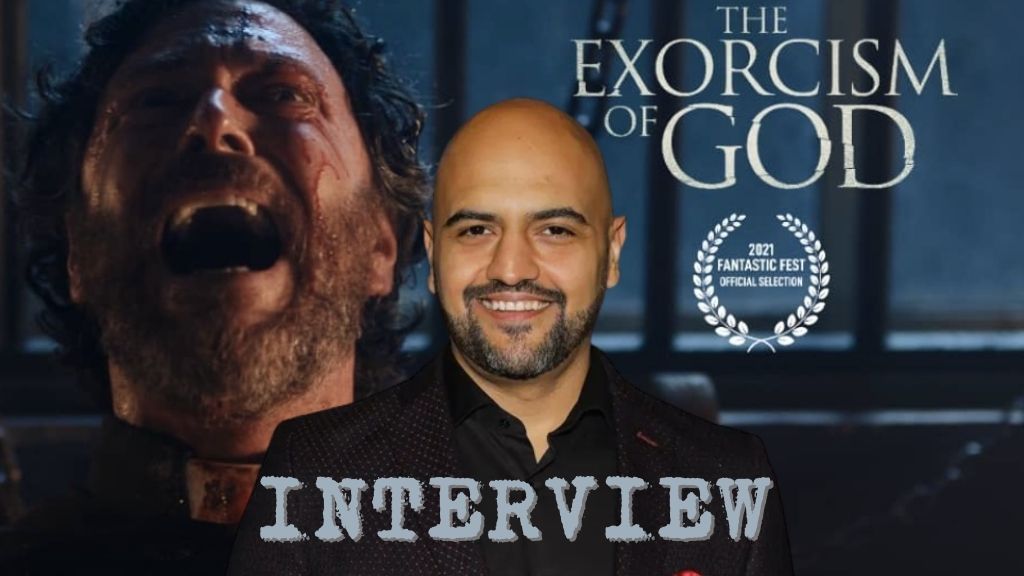 For his latest horror venture, The Exorcism of God, Venezuelan filmmaker Alejandro Hidalgo found inspiration in his own childhood fears: “When I was a Catholic, I knelt in church to pray to a messiah who brought a beautiful message of love and forgiveness to humankind, but the figure I was praying to showed a tortured man, crucified and covered in blood. That image scared me deep inside” he says. “After watching a scene as aberrant as that of the desecrated Virgin Mary in “The Exorcist“, I was so traumatized, that every time I prayed to the Virgin, I couldn’t help but imagine her in her demonic figure, covered in blood, with breasts and penis. In this way, the sinister image of the diabolical Jesus Christ, possessed by Lucifer himself, materialized in my mind.”

Those memories of images that horrified him and fueled feelings of guilt during his Catholic childhood served as a source of inspiration to write a script about a hero torn between the will of God and the chance to save his children.

Directed by Hidalgo, from the aforementioned screenplay he co-wrote with Santiago Fernnández, and starring Will Beinbrink (It: Chapter Two, “Dark”), Joseph Marcell (“The Fresh Prince of Bel-Air”), María Gabriela de Faría (“Deadly Class”), Hector Kotsifakis (Luna de miel) and Irán Castillo, The Exorcism of God follows Father Peter Williams (Beinbrink), an American exorcist tormented by the guilt of an old sin: When possessed by a demon he was trying to expel, he committed a terrible sacrilege. To atone for this sin, Peter devotes his life to charity work in a small town in Mexico but, eighteen years later, his deeply buried secret comes to light when the demon from his past returns, possessing a girl and unleashing a deadly disease. Ultimately, Peter is forced to choose between saving his own soul and saving the people he loves most in one final, epic battle against the evil within.

Ahead of the release of The Exorcism of God in Theaters, On Demand and Digital this Friday, March 11th, CinemaChords’ Howard Gorman sat down with Hidalgo to discuss paying tribute to William Friedkin’s seminal cult classic in this particular subgenre, whilst reinventing exorcism movie tropes by implementing perceptive, cutting social commentary and inspired instances of comic relief, and how he regards the film as his statement that there is not always a true communion between spirituality and religion.