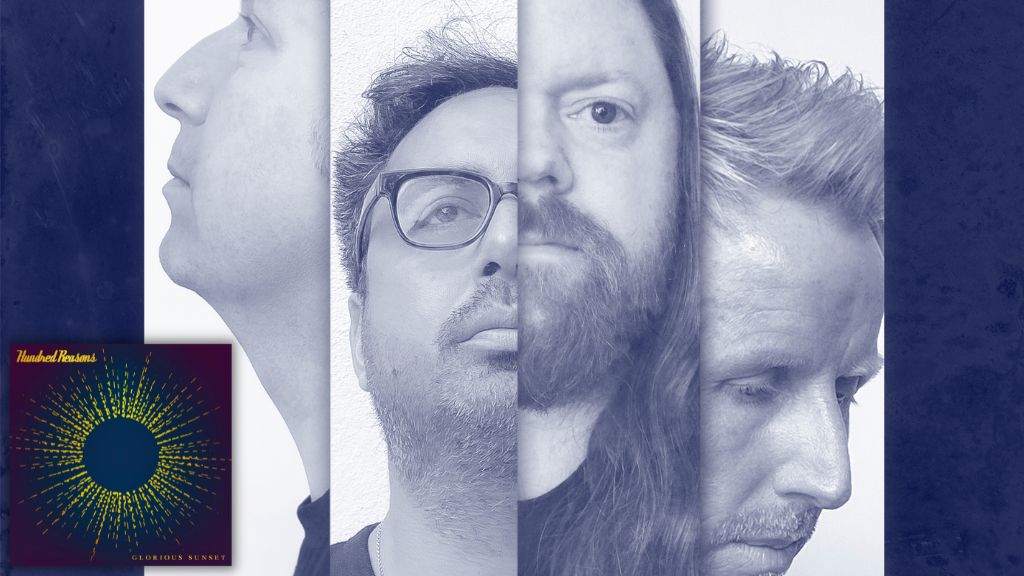 Aldershot alt-rock quartet Hundred Reasons have just announced the release details for “Glorious Sunset,” the band’s first studio album together in a decade and a half.

Despite the band members’ (Colin Doran (vocals), Larry Hibbitt (guitar, vocals), Andy Gilmour (bass), Andy Bews (drums)) lives, roles and responsibilities having diverged, their creative urge naturally brought them back together – so much so that their first sessions became less about re-capturing the magic of their previous four studio albums or addressing unfinished business, and more about satisfying a growing urge to be creative together once more.

They set about rekindling that passion that none of them had ever lost, focusing on rediscovering their raw, spontaneity and then honing and polishing what they came up with with the band’s very own Larry Hibbitt serving as producer. Their new approach culminated in “Glorious Sunset”, a collection as vivid, exciting and fresh as anything they have recorded to date whilst still retaining Hundred Reasons trademark sound, with each track brimming with passion.

Recalling the first writing session, lead singer Colin Doran said: “I came away from that session not just feeling closer to the other guys, having not seen them for some time, but thinking the music was fucking awesome. We all looked at each other and knew it was a go.”

The album’s title track, “Glorious Sunset,” (released today as a single) is the quintessential example of the band’s newfound creative drive. Doran’s signature stirring vocals and soul-baring honesty lend themselves to a gorgeous, thrumming ode to grief that reminds us that whilst the death of a loved one brings pain and regret for wasted time and words left unsaid, celebrating the life that has been lost takes precedence over everything.

Elaborating on the single, Doran added: “When we started writing again it was really important that we did not go back to any material that had been cut previously. It all had to be completely new. We started writing just before Covid and got together sporadically as and when we could to write and demo which was not our usual way. We would normally be in a room together for the most part but this time it was not always possible. Larry and I would write, then Andy and Larry would write, and then I would join the session later in the day (I have a day job) but we were all super happy with what was coming out. This was a deal breaker for all as if we were putting out new material it had to be amazing.

Glorious Sunset came about from an instrumental idea from The Andy which was nearly complete minus any vocal ideas. The lyrics for the song completely changed from the demo version to the recorded version as within that space of time my mother passed away after a 4-year battle with cancer. She had gone into remission twice previously and it come back again but this time it would be terminal. The title of the song took on a new meaning as the song talks about being relieved that someone you love is no longer suffering. The sunset refers to the light that many people say they see when they die.

During recording, Larry started playing around with synths and effects that added more to the song but by the time all of the music was recorded, no one in the band knew that the lyrics had changed so it ended up being an emotionally draining session in the studio that day. In all lots of lyrics changed during that time period as it brought on a new perspective which shaped the narrative of the material.”

“This album isn’t something we felt we had to do. We simply arrived at a position where the music was so good that it was something we needed to do.”

“Glorious Sunset” is slated for a 24 February 2023 release date via SO Recordings and the album is available to pre-order now on CD and white 12″ vinyl, as well as T-shirts and signed lenticular prints here.

You can listen to the eponymous single on streaming services here now.

The band will also be heading off on a headline tour of the UK in February 2023 with special guests Hell Is For Heroes and My Vitriol. Tickets are available here.

Don’t forget to check out our Noteworthy section on the site which includes weekly videocast interviews featuring musical talent we hope are either already or, about to become your new favorite artists. You can watch/rewatch all previous episodes via the video playlist below featuring the likes of Turin Brakes, Embrace, The Sherlocks, Stanleys, The K’s, The Native, The Clause, and many more.