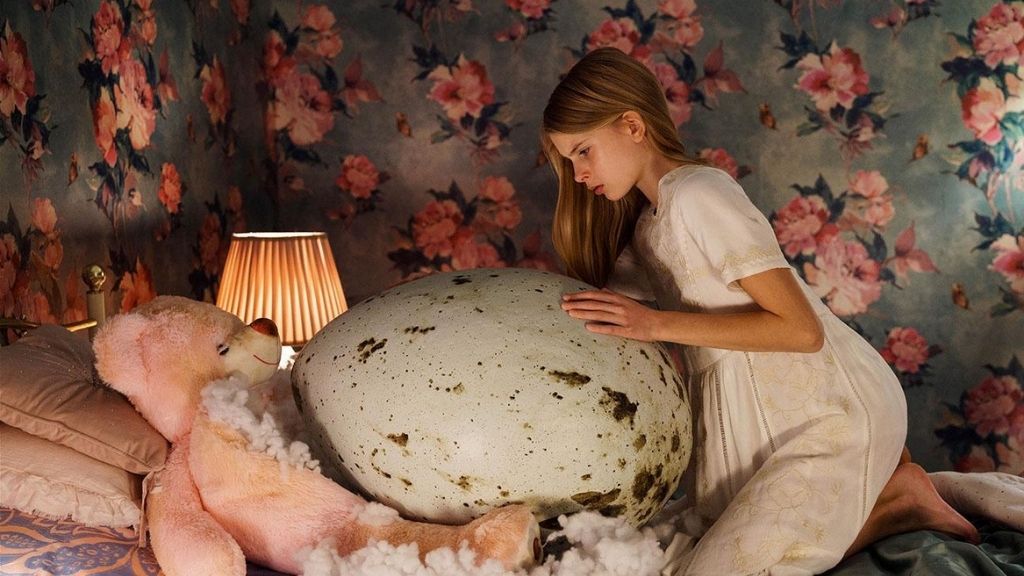 SYNOPSIS: a young gymnast who tries desperately to please her demanding mother, discovers a strange egg. She hides it and keeps it warm, but when it hatches, what emerges shocks them all.

After a crow flies into their home, Tinja (Siiri Solalinna) catches the bird and passes it to her mother who shockingly breaks its neck in front of her. “Please take it to the trash, dear,” she says, “Organic waste.” The opening scene in Hatching provides some of the best jet-black comedy that features throughout this unusual dark fairy tale. Later that night, awful cries of pain emanate from the woods, and discovering that the bird is still somehow alive, Tinja takes a rock to its head, ending its misery. Here she finds an egg which she takes home and nurtures in secret.

As the egg grows bigger, we see the 12-year-old gymnast being pushed to her limits by her hard-boiled Mother (Sophia Heikkilä), a driven influencer whose own career as a skater was cut short by injury who is now vicariously living her dreams of sports stardom through her poor daughter who will do anything to please her. Mother may outwardly project living a dream life for her followers, but she is having an affair and after discovering this, Tinja realises she isn’t so perfect after all. Solalinna, in her first role, is impressive – in a standout moment, wonderfully conveying bewilderment and pain with just a look when she is asked to keep things a secret from her kind-but-useless father.

After a particularly brutal training session that leaves blisters on both hands, Tinja returns home to find the egg has begun to hatch. What emerges, in all its slimy glory, is a wonderful work of practical effects that impresses as much as it revolts and is unlike anything you may have seen before. There is still real joy in watching an actor being able to convincingly interact with a physical creation, rather than CGI.

As the two bond, it soon becomes clear that the creature is a doppelganger, a version of her that isn’t afraid to act on the thoughts and feelings she suppresses. Can’t sleep because the neighbour’s dog is barking? Dead dog. Worried about your place on the gym team? Competition eliminated. As the emotional turmoil deepens and events spiral way out of control, things become a tad generic, but still offer a sweetly dark coda.

Bergholm is certainly a name to watch and whilst her film about growing up and the social pressures placed upon women of all ages feels somewhat stretched at just 86 minutes, Hatching is still one of this year’s must-see movies.