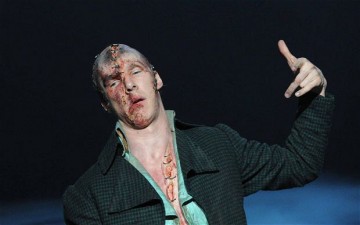 The endlessly active Guillermo del Toro obviously can’t get enough of Benedict Cumberbatch, so much so that following their upcoming collaboration in Crimson Peak, he is already looking to collaborate with Cumberbatch on another of his impending projects – Frankenstein.

This news was confirmed when the director spoke to the Daily Telegraph about wanting to team up with the star of BBC’s Sherlock in a film version of Frankenstein. Del Toro has been preparing this project on and off for a good five years and in 2009 he was reported to have conducted a few shooting tests, chosing Doug Jones (“Pan’s Labryinth, Hellboy) to play Frankenstein’s monster although nothing came out of that.

Back to the present day and, given Cumberbatch’s recent appearance in Danny Boyle’s stage version of Frankenstein alongside another present day Sherlock, Jonny Lee Miller, with both actors sharing the roles of the monster and Doctor Frankenstein, del Toro’s choice was pretty much going to be made for him on a silver platter.

This is all just talk at the moment and, given the fact that Fox have confirmed the release of their own version of Frankenstein, starring Daniel Radcliffe, for October 2014, Universal will most likely avoid being too hasty in putting their take on the much loved novel into motion.

As we said, del Toro is quite the busy chap, as always, with Pacific Rim hitting cinemas this Friday, 12th July. Moving on from that he’ll start work adapting his series of novels The Strain for TV to go on to develop his next feature film, the gothic horror Crimson Peak early in 2014, starring the aforementioned Benedict Cumberbatch and Pacific Rim’s Charlie Hunnam.

We’ll leave you with a trailer for Pacific Rim which we are eagerly awaiting to catch in cinemas this Friday.