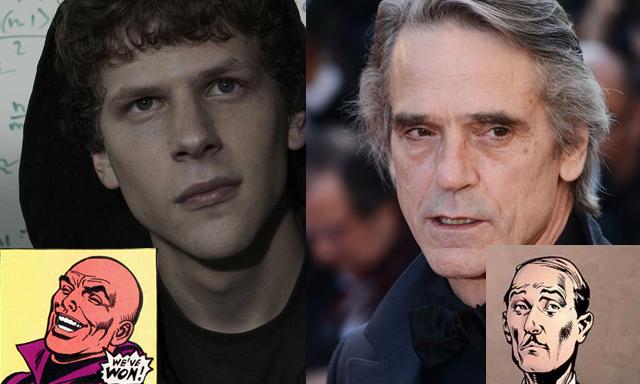 Following the controversial announcement at the end of last year that Ben Afleck would be taking the reigns from Christian Bale’s Batman, the announcement of Eisenberg as supervillain Lex Luthur is sure to stir up more discussion.

However, Synder believes that Oscar nominated Eisenberg is perfect for this role:

“What’s great about Lex is that he exists beyond the confines of the stereotypical nefarious villain. He’s a complicated and sophisticated character whose intellect, wealth and prominence position him as one of the few mortals able to challenge the incredible might of Superman. Having Jesse in the role allows us to explore that interesting dynamic, and also take the character in some new and unexpected directions.”

The role of Lex Luthur has been under hot debate, with names Bryan Cranston, Mads Mikkelsen and Jude Law being chucked about in recent weeks.

Oscar winner Irons has big boots to fill, following Michael Caine’s portrayal of the ever faithful Butler of Bruce Wayne, Arthur, but Synder is fully confident of Iron’s ability:

“As everyone knows, Alfred is Bruce Wayne’s most trusted friend, ally and mentor, a noble guardian and father figure. He is an absolutely critical element in the intricate infrastructure that allows Bruce Wayne to transform himself into Batman. It is an honor to have such an amazingly seasoned and gifted actor as Jeremy taking on the important role of the man who mentors and guides the guarded and nearly impervious façade that encapsulates Bruce Wayne”.

We will have to wait until 2016 to see how the cast fare in their exciting roles, but the question on my mind is, Is Eisenberg going to go bald? Given the hate showing up across social networks he most certainly may…