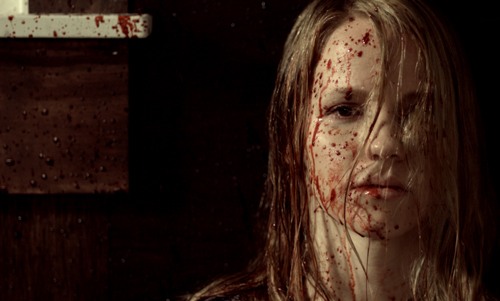 From Director Zack Parker comes Proxy, a gripping thriller starring Joe Swanberg (You’re Next) and Kristina Klebe (Halloween). Co-written by Parker with his writing partner Kevin Donner, Proxy tells the story of Esther. When attacked by a hooded assailant after seeing her gynaecologist, Esther seeks consolation in a support group where she meets Melanie. But as time passes the empathy between the two turns dangerous for both in such a way that is disturbingly original.

I personally had the pleasure of watching the film at its UK Premiere when it was played as part of the lineup of the 2014 Glasgow Frightfest film festival. I can’t praise the film enough but you don’t have to take my word for it as here are a few examples of what people had to say about the film:

“Truly one of the most mesmerizing and horrific films i’ve seen all year… this year and any year.” Ain’t It Cool News

Proxy has been picked up for UK distribution so you can expect it to be released later in the year. Meanwhile, why not check out the trailer for yourself.

[HORROR AND SCI-FI EDITOR] Jon Dickinson graduated from Sheffield Hallam University in 2006 with a Bachelor of the Arts degree in Communication Studies with an emphasis on PR and Multimedia. Since graduating he has contributed to several publications and regularly attends some of the biggest film festivals in the UK including Film4 Frightfest.
You might also like
Killer ChordsTrailers