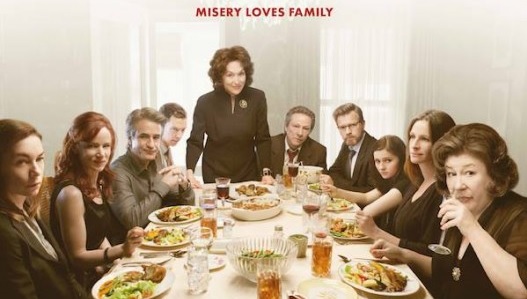 August: Osage Country comes out in just a few weeks. Many films have come before that have been a film adaptation of a famous play. August: Osage Country is a award winning play that had a limited run on Broadway. Now the hope is to transfer that incredible energy and darkly comic sentiments to the big screen as the screenplay is written by Tracy Letts who penned the original version.. But with the main pull with this is the stellar line up and talent that fill up the roster in John Wells film.

Focusing on the dysfunctional family Westen, August: Osage Country centres around the venomous alcoholic and pill popping matriarchal figure Violent and her extensive family who are dealing with a copious amount of issues. Together they battle problems such as cancer and possible incest as they all tangle up together with wrought tension and a bond stronger than any other. Starring the likes of Meryl Streep, Julia Roberts and Ewan McGregor, this movie is coming to be rich on black humour and hopefully the collection of famous faces and skilled actors wont sink the movie but instead enrich it.