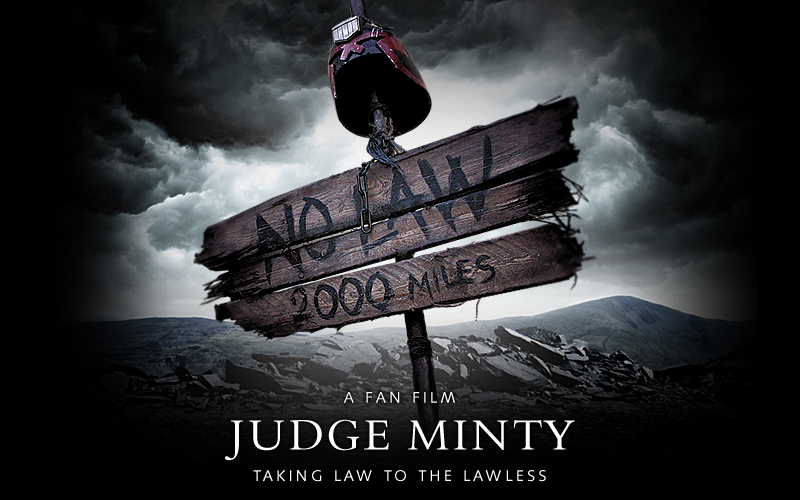 Judge Minty is one of the finest and most elaborate fan films I have ever seen, and it is available for free online here.

I spoke to writer/director Steven Sterlacchini and director of digital effects and photography Steve Green.

For those who are yet to see ‘Judge Minty’ can you give them an idea of what it’s all about?

SS Judge Minty is a NOT for profit fan film based in the world of the 2000AD character Judge Dredd. The story focuses on Judge William Minty, a minor character created decades ago, who only made a couple of appearance in the comic. As well as being a great character, the story touched on some elements which became important to Dredd later. From the synopsis – “Judge William Minty has spent his entire adult life policing the violent streets of Mega-City One – and now he’s slowing down. When a lapse of judgement almost ends his life, he knows that it’s time to quit. He can choose to teach in the Academy, or he can leave the city and walk alone out into the anarchy of the Cursed Earth, taking law to the lawless.”

Why did you make this film?

SG Partly to see what could be done – previously fan films had been shot on DV, but HD was becoming more common, making green screen a lot more accessible (although still has certain drawbacks).

Software at the desktop level has been around for a while, and I have a background in entirely CG animation, but I’d always tinkered with mixing live-action and CG. This seemed like a perfect opportunity to do it. Also, at the time, the only screen Dredd (bar a video game cutscene Dredd) was the Stallone one, and another Dredd world film seemed miles off.

Parts of it look like a mega budget Hollywood blockbuster – how on earth did you manage that on no money?

SG The costumes and props helped a lot – the exterior locations were great, I think we just picked our battles – like adding a few wrecked blocks to the various quarries, and all the dust etc. There were some compromises since I was doing the majority of the VFX work as well as shooting it, so it was spread pretty thinly – I could easily have worked on shots for a lot longer, but it had to be out at some point.

SS Also the number of people, both fans and professionals, who gave their time for free was a key factor. People like editor Ben Woods, Sound Designer Travis Hefferen and composer Phil Oates, all added their valuable expertise for free.

What were the most fun and most challenging aspects of making the film?

SG I enjoyed the green screen studio shots, I’d never really shot any before, so there were technical things to learn – things like the helmets picking up the spill from the side walls, best practice for shooting (we were shooting on DSLRs which are OK, but not ideal for keying).

The most challenging was probably Wales – the weather was pretty abysmal at times.

SS Seeing the results of everyone else’s works was lots of fun. Dan’s props and costumes, Steve’s effects, Jared Butler and Fryda Wolff‘s voice over work and of course Edmund’s performance. That and meeting up with the people who volunteered to be actors and extras, much of the time providing the enthusiasm which kept us going.

SG Very positive – we were always aiming at the fans, and there have been a lot of great comments – there will always be some griping, but you can’t please everyone.

SS Even some of the criticism has been from people who have taken the time to watch the film in great detail, which I personally still get a bit of a thrill about. With our budget and time constraints, it’s obviously far from perfect, but it’s nice when people put that aside a little and ‘jump on board’ to enjoy the film for what it is.

Who are your main influences?

Also a big shout out to Andrew Kramer who runs the Videocopilot site. Minty was pretty much my baptism of fire in the world of After Effects, and the tutorials on that site really helped get me up to speed, and put ideas in my head of ways to approach doing the effects.

SS I’ve definitely been inspired by people like Mick McMahon and Terry Gilliam, to at least try and do something creative.

What are your thoughts about 2000AD?

SG It’s been enormously influential, and I’m surprised that so little of their IP has made it onto screen, either as commercial TV or film or as fan films. It’s also great to see the newer artists and writers coming through, and it taking advantage of digital copies, for those outside the UK that must be a blessing.

What do you think of the two Dredd films?

SG I didn’t mind the Stallone one as much as some, I’ve got it on Blu-ray… I even borrowed the Hall of Justice for Minty, there was some great design work in there.

The 2012 Dredd was great, Karl Urban did a wonderful job. I’m a big John Carpenter fan, so it felt like a ‘lost’ early 80s John Carpenter film, and would love to see where they could take it.

Has the internet opened up things for filmakers like yourself?

SG Sure, just from the delivery point of view – you now have a couple of areas to show your work around the world. Obviously with fan films you can’t make money from it, but as a way of getting it out there it’s great to have the option.

SS It also allows you to get in touch with like minded people a lot easier. Even something like tracking down an actor such as Edmund, is much easier to do.

Can you tell us a bit about your previous work?

SG I’ve a background in games, but have been freelancing for about the last 8 years – broadcast/event graphics/corporate stuff mainly.

SS My background is mainly in design and art direction. Judge Minty, is the first finished film project I have worked on.

What are your plans and what do you hope to achieve in the future?

SG Get paying work in. Beyond that, I’m not sure – chatted about a few things, I’ve no idea if anything commercial will come off the back of Minty, but even if it doesn’t it’s still been enormous fun, and we’ve learnt new things.

SS I think we’ve got a few ideas bubbling, but nothing definite yet. I doubt we’d announce anything until we had it all planned. It would need to be something that could be turned around in a much quicker timescale.

SG Anyone wavering about whether to do something, just give it a go – it doesn’t have to be a 27-minute epic (in fact I’d advise against it being that long…).

There’s only so many cat videos Youtube can take…

We’ll leave you with the short film, Judge Minty: