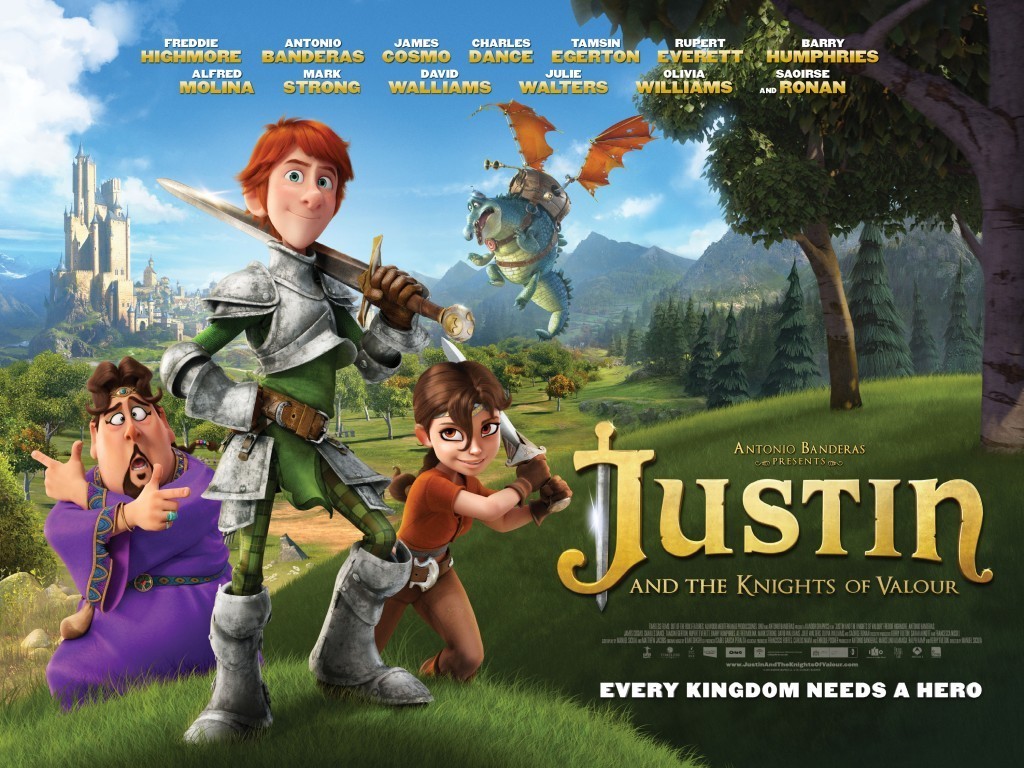 Justin and the Knights of Valour is a heart-warming 3D animated adventure fantasy film following our unlikely hero Justin, voiced by Freddie Highmore (Finding Neverland, Bates Motel), intent on becoming a Knight just like his Grandfather, Sir Roland. Despite the fact that all Knights having been banished by The Queen in favour of Lawyers an uplifting visit to his Gran’s (Julie Walters) makes Justin all the more determined to bid farewell to the life he once knew, including his sweetheart, Lara (Tamsin Egerton) to train to be a Knight.

As the film is released this very Friday we were very lucky to be able to interview the voice behind Justin, Freddie Highmore.

What in particular appealed to you about making Justin and the Knights of Valour?

I like the fact that Justin is not the obvious hero. Physically he wouldn’t be anyone’s first pick to be the knight in shining armour.

Can you tell us a bit about your character and his journey?

Justin starts out a weakling wannabe knight daydreaming about winning the heart of a girl who doesn’t have the slightest interest in him. What he does have is strength of character. He’s the little guy who has the courage to stand up against evil. He’s the guy who comes to realise that beauty is on the inside.

What would you say distinguishes the film from other big screen animations at the moment?

I think it’s more of a retelling of a traditional fairy tale. I think that gives it a special charm.

How does voice acting compare with acting on set?

Well, as a voice actor you get to play a broader range of characters. The audience isn’t looking at you thinking ‘no way is he 16 or 26,’ or ‘he’s not short enough to be a jockey or tall enough to be a basketball player.’

Technically, you also don’t usually voice the part alongside the other actors. You’re on your own and not only has the script been written by someone else but the appearance and actions of your character have already been created by the animation team.

What were the most enjoyable and the most challenging aspects of making the film?

Often it’s not the dialogue but the “sound effects” which are both the most fun and most challenging; standing in a little sound proofed box recreating all those little puffs and pants of a sword fight or that five second scream we all make when flying on a dragon!

How does it feel to watch an animated character talking with your voice?

Less nerve wracking visually! I don’t have to worry if I got the continuity right.

Is making a film like this a particularly long process?

No. Compared to live action films it’s no time at all. You don’t have to travel to location. I recorded much of Justin in a studio in Madrid where I was spending a year abroad during my university studies.

Does the film have a message or is it simply pure entertainment?

I guess all entertainment has a message to some extent. Justin’s adventure is a fun journey battling danger and disaster to do what he knows is right. We all have to make those choices and be brave when the odds are against us although most of us don’t find ourselves dangling over the edge of a cliff with a sword pointed at our throats!

How do you feel about the finished film?

Not having been there when they were working, I think the other actors do great stuff. Obviously Antonio [Banderas] is an amazing actor. I also loved Saoirse [Ronan]’s feisty heroine and bluster of David Walliams‘ kind hearted wizard with his really pretty suspect magical powers. It’s a great cast and the animation is just so right for the story.

You have worked with Robin Williams and Johnny Depp – what memories stand out from those times?

All good. Growing up on film sets was a magical time for me. Stars like Johnny and Robin really are special people and I am lucky to have spent so much time with them. Looking back, even I find it hard to believe that it was me. My life hasn’t been quite as exciting as Justin’s but not far short!

In this article:Freddie Highmore, Justin and the Knights of Valour