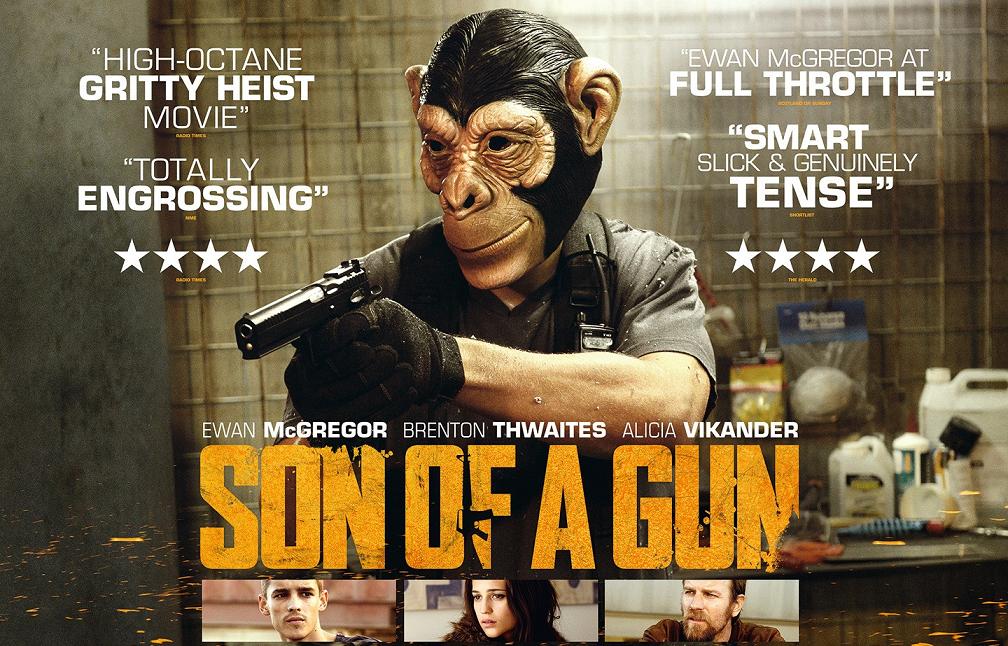 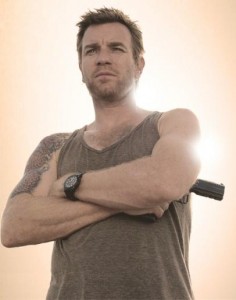 Son of a Gun marks the directorial debut of Julius Avery, who took home the Cannes Jury Prize for his short film Jerrycan. Starring Ewan MCGregor (The Impossible, Trainspotting), Brenton Thwaites (The Signal) and Alicia Vikander (Ex Machina) the film follows 19-year old JR (Thwaites), imprisoned for petty crime. The harsh realities of prison life hit JR and he soon earns some well-required protection from one Australia’s most notorious criminal, Brendan Lynch (McGregor). As you can imagine, said protection comes at a price; Lynch and his crew have plans for their young protégée as they plan a gold heist that promises to deliver millions.

To celebrate the release of Son of a Gun in UK cinemas this weekend Ewan MCGregor told us what it was like going behind bars as a hard-as-nails criminal, certainly a role we’re not used to seeing him portray…

Brendan Lynch is quite a departure from the range of characters you’ve previously played. What attracted you to the role?

Brendan totally fit the bill in terms of doing something that was different for me. There’s something really interesting about how hardened he is, and how clever he is and manipulative. I played Iago [from Shakespeare’s ‘Othello’] on stage some time ago, he was a huge manipulator and I really enjoyed that aspect of playing him. So this was a chance to further that, and also to play somebody who’s unwaveringly in charge. Nobody really questions Brendan. That was good fun.

How were you approached for the role and why this project?

I didn’t know what was going to happen! I read a lot of scripts and a lot are just versions of other movies, but this had something else at its heart, a complicated coming of age story. Julius Avery wrote me a letter when he first got in touch, and there was an element in it about something that had happened to him. At the heart of this story is the search for a father, and because of that complicated personal element in the script, the whole movie becomes something other than just another shoot ‘em up or a heist film. It’s got something quite deep in the middle of it and I think that holds the whole thing together. Although we didn’t discuss it much there was the knowledge that was in the middle of it all.

Were you prepared for such a physical performance and do you enjoy shooting these scenes? 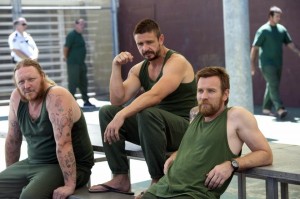 I’m not really attracted to action sequences, because my experience is that it’s quite a slow process to shoot them, and often we’re not involved as actors. But this was very different. We were in more of it. And the action sequences were good fun. The first time we got in a helicopter, I got in the back seat and I noticed my machine gun was tied to the chair. I thought that was odd, why would the machine gun be tied down? And then they said ‘okay, ready to take off’ and I said ‘the door’s open’ and they said ‘yeah, the door’s going to be open’ and I said ‘what?’ and the pilot said ‘just put your seatbelt on. You’ll be fine!’ And the next thing we were like 1500 feet in the air sitting next to an open door so some of the action sequences came as a bit of a surprise to me! But it was good fun.

Brendan’s character is hardened by prison life, emotionally and physically. Did you work out especially to fit the mould of the character and what did you routine involved?

I did a lot of working out at home for about two or three months leading up to the film to get fit. I wanted to look like I could take care of myself, so I did quite a lot of working out with trainers in LA and in Perth. But then I got to the prison and met all these enormous guys, and I was like ‘oh cheers Julius (Avery, the director), thanks. You made me look really small in front of all these guys!’ Matt Nable took over when we were in Kalgoorlie. We had about 10 days in Kalgoorlie and we formed this little fight club, me, Matt, Brenton, Nash Edgerton and some of the other cast members popped in. We would do a minute at a time with Matt and he would have us punch him. I’m not used to punching someone! It’s not something that I’ve done a lot of but he would say, ‘come on hit me, hit me’ and he’d swear at you and call you names until you did. Then every night he’d give you a way tap back just to remind you who was in charge! But it was good fun and it was good after a day’s work to go out and do that together.

The central relationship between Brendan and Thwaites’ character JR feels like a very paternal one. What is it do you think Brendan was teaching him?

There’s definitely something paternal about it. He’s showing him the way but it’s Brendan’s way. He’s pulling him into a life of crime and violence that the kid’s not used to. JR has obviously done something to land him in jail but you get the impression that it wasn’t terrible, probably a bit of petty crime here and there. When he meets Brendan and Sterlo, he sees the violence they’re capable of and how mundane it seems to them. He’s teaching him that world. He’s totally taking him along and showing him the ropes like a father might show his son how to ride a bike or something.

Where was the film shot and what struck you about the locations?

The film was shot in Western Australia. I had never been before and I was really impressed by it. Kalgoorlie is dominated by the mining industry of course so the landscape is peppered with these massive pits; they were quite amazing to see, I mean just the scale of them. It’s always nice with this job, it takes you places and you see parts of the world you might not otherwise see. I like working here, I like the Australian crews very much, and it was nice to work in Perth. Another place we went was Rottnest Island, which is spectacularly beautiful. I saw the most amazing sunset of my life there. I went for a run after work one day and I just had to stop and just take it all in. And there are those little animals that live on Rottnest, the quokkas… funny little things! We shoot with the light so by the time you get out for a run, it’s already getting a little bit dark, so you’d be running along and they would shoot out and scare the shit out of you! Like little furry bowling balls coming at you or something!

The project has a great mix of influences and action/thriller elements. What are your thoughts on the final film and what the director has accomplished?

Julius is many things but one of the things that Julius is, is a real movie geek. In a way he’s written the movie you’d most want to sit and watch. You can see it in the action scenes, or when they crash the car, fire the guns, he gets pretty animated and excited. It reflects his movie tastes, and that’s always a good place to start. You paint a painting that you would most want to see.

Son of a Gun is in cinemas across the UK now. We’ll leave you with the offical trailer from Koch Media Films.