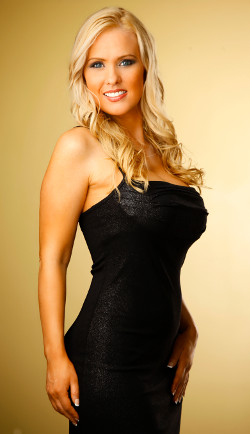 Today Darcy Donovan has come to Cinema Chords in order to talk about her new project where she plays a mermaid in an interactive movie! MovieMaze takes what we all loved about those choose your own adventure books as kids and applies it to movies. This is Darcy’s second time working with the guys from MovieMaze as she appeared as a werewolf in their previous film.

Hello there, thank you for taking some time out to speak with me today! How are you?

This MovieMaze concept sounds interesting! Can you just explain exactly what MovieMaze is and how it works?

Yes, it is a very interesting, since it is the world’s first interactive movie app. To give you a little more information James, it’s like the ‘Choose your own Adventure’ books from when you were a kid. As the story progresses, you have different options to choose from. The first game The Mechanic is a hilarious and fun story, since some of the choices will lead you to some completely unexpected and crazy outcomes.

That dies sound rather unusual! And in this new one (The Plumber) you play a mermaid character who was written for you, correct?

Yes. I did play a mermaid, so Darryl Hannah eat your heart out! After working on The Mechanic and playing the part of a werewolf the amazingly sweet and talented filmmakers, Maria Collis, Erik Lundmark and Rishi Thaker decided that they wanted to bring me back for the second project.  We had all built a wonderful relationship together, so  I was happy to be a part of The Plumber. Playing the part of a mermaid was definitely on my bucket list of roles that I wanted to do in my acting career. I had a lot of fun and look forward to future projects with them as well.

How do you set about approaching a character like a mermaid, and does your approach differ in a project like this compared to a film/TV show?

In all actuality when you are building a character it is relatively similar for film, television or an app like this. You take the time to formulate a character including their actions, attitudes, style and motivations etc. This character was a little bit mischievous, but she was a lot of fun to play. She definitely was sassy. The minute I put on the mermaid costume, it immediately put me into the mindset of the character. I feel that the final touch of putting the costume on helps an actor or actress complete their interpretation of the character and really be able to embody the character as a whole.

What is it like filming something like this? Does it simply feel like a normal set or do you have to do a lot of takes and alternative scenes?

Working on this project is a lot different than working on a film or TV show. When you go into a regular movie shoot  the lines are set and the scene does not change, unless the director asks you to improvise. Once you are done shooting, you move onto the next scene. In a project like MovieMaze, it is very different, since we have multiple endings. So not only are we shooting multiple takes to get the best shot for that one scene, but then we have to go back and shoot the multiple alternative endings several times as well.  It was a lot of fun to shoot, but challenging, since there are a lot of great turns and twists that happen.

Now traditionally mermaids sing and seeing as you’re a singer I was wondering whether you are asked to sing in this role?

Well it’s funny that you ask that. No this was not like The Little Mermaid and my character was NOTHING like Ariel! There was a little bit of a jingle in there that we did but this character was more mischievous and sassy as opposed to a normal Disney character.

Do you find that being both an actor and singer often complement each other when you’re working?

Absolutely, I definitely think that they complement each other since they are both about story telling. When I am doing my music I’m playing a ‘part’ as each song tells its own story.  When you are doing a film it’s the same type of thing. Both acting and singing have their own unique stories, characters and depths that you are digging down in to. I believe music and film are closely intertwined in this way and are extremely important to each other. It’s no different than when Jennifer Lopez played the role of Selena.

Did you start out wanting to be either a singer or an actor, or where you just more interested in performing?

I get asked this question a lot. The one thing I always say is that singing and acting are like my twin babies. If you had twins is there one that you are going to love more? No. You will love them both equally. I have always been a performer, I have always been acting and singing ever since I was a little kid. To ask if I love one over the other is something that I would not be able to tell you since I love them both equally.

Yeah I can understand that! And Darcy before you go, what else do you have coming up which we should be looking out for?

They recently aired my episode of Parks & Recreation that I worked on with Chris Pratt. He is such a sweetheart. The cast and crew were also absolutely amazing. Working on that project was so much fun.

Right now, I am in the process of getting the music video done for my new single that is coming out. I was really excited that my last single It’s My Life charted on the top ten on iTunes. I am also working on recording a few new tracks, as well as writing several books and a screenplay. I am getting ready to start filming on an action/suspense thriller film The Final Table – I get to play the role of a poker champion, so I am looking forward to it since I love poker!

Fantastic, keeping busy then! Thanks again for taking the time to chat with me today!

Thank you so much James for your great questions! Also, I wanted to thank all the readers and my  wonderful fans that are with me throughout my amazing journey, you all inspire me each and every day. God Bless!

And there we go folks… if you enjoyed the interview then please do go ahead and look up Darcy Donovan and Movie Maze. Darcy’s IMDb page can be found right here. Also don’t forget to drop a comment in the box below!