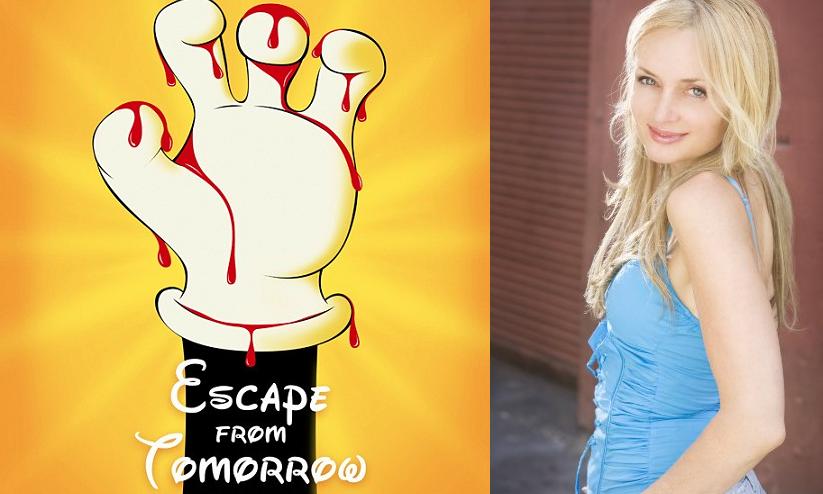 Escape From Tomorrow is a guerilla film with pure controversy surrounding its creation, that’s recently taken the indie circuit by storm. When thoughts about huge conglomerates and cultural monopoly arise, Disney is a likely association. In that vein, Escape From Tomorrow attempts to make a statement in what could only be described as a scathing critique of mass consumed content from the likes of huge companies like Disney.

Director Randy Moore made the decision to shoot the majority of the film in Disneyland, regardless of any possible legal consequences. Disney are aware of the film, and have not reacted, perhaps opting to simply let the film pass. The story concerns a man who loses his job, and is in a weak mental state before taking his family to Disneyland. Hallucinations and bizarre occurrences follow, as his sanity wavers.

To celebrate the release of this dark, cutting edge thriller we were lucky enough to have a chat with the lovely Alison Lees-Taylor. In the interview below we talk about her thoughts on the film, her endless portfolio of voice-acting work, and her influences as an actor.

To start with Alison, can you tell a me a little bit about your character ‘The Other Woman’ in Escape from Tomorrow?

Well, she’s a crazy woman, a rather dark character, kind of a dark princess.

Kind of a baddie then?

Um, yes. You’ll see more of me at the end. I can’t disclose too much about my character’s role in the film… I get to wear really great colourful costumes though. Unfortunately it’ll all be in black and white. She’s just a really weird, crabby kind of woman, I suppose.

Was it hectic shooting and filming inside Disneyland?

That’s a funny story actually, due to the time constraint of when I was needed, I shot my scenes at a hotel, and in a studio. So I didn’t have to go that far, or go to that length. I was lucky. At the time I kinda was happy, but now hearing the stories I wish I was there, in the chaos. I was kind of out of the loop, I wasn’t acting when I got a call back, I was mainly renovating my house. I’d auditioned about 3 years prior, got a call out of the blue, now I’m back, and glad to be back doing this again. I was doing video games and things, other than that I wasn’t REALLY acting.

Obviously Escape From Tomorrow is rather controversial considering it was filmed mostly in Disneyland without their consent, and such. Any thoughts on the issue?

I don’t know very much about that side of it. I’m just happy it’s still coming out, with a release on Friday. So I’m just excited to see audience’s reactions to it. We’ve had a few preview screenings already, and it’s gone really well. There’s just such a buzz and a hype around it. I auditioned at this tiny little theatre in Hollywood 3 years ago, and now it’s this big extravaganza. It’s a big shock for me. I mean, I’ve been out of this for years, and my director calls and just says ‘we’re going to Sundance Film Festival’. I didn’t know about that stuff when I auditioned. I just saw it online, went and auditioned, and everything felt very theatrical. It felt like doing a play. I love the character because she’s mad and the writing is very fluid. I didn’t know about any of the other stuff until later.

Do you have any upcoming projects you could possibly tell us a little about?

Let me think…Night Bird? Will be coming out very shortly. Quite an interesting film, therapist by day, lady of the night by night. Filmed in New York for a month. I did a video game recently, Final Fantasy: Lightning Returns. I did the body capture for Cleopatra in Dante’s Inferno, which involved a lot of crawling around the floor and stuff. It was an odd feeling, the costume was really uncomfortable and it took about 2 hours just getting into it. I much prefer the voice work though. I’m really glad I did it.

You’ve quite a daunting portfolio in both video game, and anime voice over work. Is there one you prefer over the other?

No, I like to mix it up. With animation, its fun being a little Italian girl, then a French granny… then in video games I always play the evil people, and the villainesses. I like variety, it’s the spice of life y’know.

So you’ve developed quite the reputation for portraying evil women?

People always say I can’t believe your work, you seem so nice…as if my work strongly implies that I’m evil. I never get asked to do goodie roles, always dark, strange women and negative character parts. I don’t know why I only get called in for baddie roles, but I do. I don’t sweat it too much though, they’re so much fun.

So how did you first get into acting?

I always dreamt I’d be an actress, though I came from a very non-theatrical background. I read about drama school, went to drama school, went to New York, L.A… It was just something I always knew I was going to do. I never met any actors in the business, I was just this shy girl from the north-west Midlands. It was just from as long as I could remember, I’d see movies on TV and just knew that was what I wanted to do.

Have you worked with anyone who influences you as an actor?

I got to work with Stephen Berkoff and I love him. Everybody wants to work with him.Suddenly I was doing a world première of his work, and he made me his assistant director. I played Shirley, the granddaughter. That was a really cool experience. I love Stephen. He’s so talented at everything really, writing, directing, and acting.

Escape from Tomorrow is released today in certain US cinemas, with a video on demand release through PDA. We’ll leave you with the trailer that raised rather a few eyebrows…