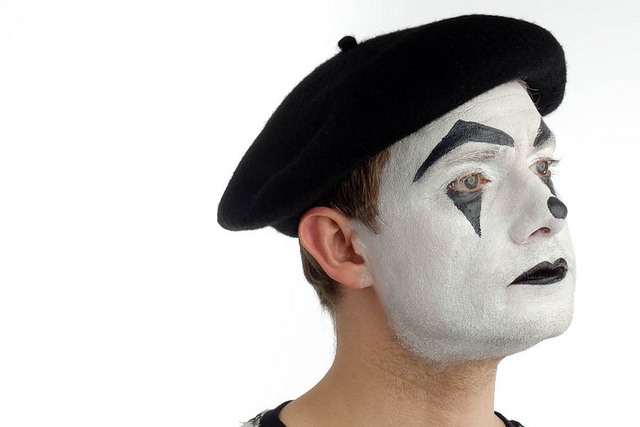 We recently saw Sherlock (Benedict Cumberbatch) take to a spot of short film action in Little Favour and now his trusty sidekick Watson is at it.

Now slightly taller and back from middle earth, Martin Freeman trades in his role as the Hobbit for Clive, a mime artist. Directed by Tim Bunn, The Girl is Mime is a thought-provoking, unique look at the world of mime in an ordinary man’s life and its colossal repercussions.

Did the mime commit the crime? Clive Buckle (Martin Freeman) is being questioned about the murder of his wife. The police are convinced he did it; they just need a weapon, but Clive’s saying nothing.

Wonderful acting across the board helps strengthen this wonderful piece of film.

Also, The Girl is Mime cleverly throws contrasting subjects together, to create an interesting juxtaposition from start to finish. First off, the traditional use of mime and a mute film is used in a modern setting. Also, Clive’s consistent use of mime objects as if it was normal, from proposals to interrogation, creates a blend of some fantastical aspects of general life alongside everyday settings, resulting in an entertaining concoction.

This also creates a mixture of feelings in the audience. Intrigue. Laughter. Sadness. In a simple short, The Girl is Mime makes you laugh out loud and want to cry, all in the space of seven minutes.

The Girl is Mine was screened this very evening at The Ritz ‘Premiere’ International Short Film Festival in Lincoln. We’re sure you’ll enjoy it just as much as the audience did there…