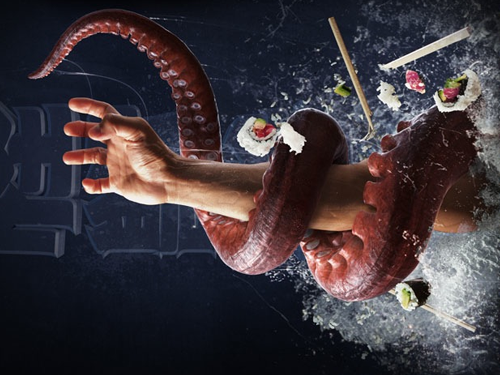 It feels like writing about Monster Roll is cheating. While it is technically a short movie, there is a story behind it as it is actually a predecessor to a larger full feature movie. That’s not to say we can’t enjoy Monster Roll as it is now, because it is bloody hilarious and hot on the action.

They say that man has had a long standing agreement with the sea; to kill only what he eats. However, when the sea is slowly destroyed by man and gets wind that it is killing more than what is actuall eaten, it is understandable that a wave of anger takes over. Attacking the city, it is up to a band of Sushi chefs to tackle them with this wickedly sharp and already funny teaser/short.

Filmmaker Dan Blank creates a movie in a similar tongue in cheek (or sushi in cheek,) fashion to action movies such as Ghostbusters and Rush Hour. Quips and jokes a plenty but also some pretty realistic monsters coming back from the sea. With an eclectic group of sushi chefs and a dig at popular culture, Monster Roll is set to be an excellent feature. It’s quite a shame that the teaser is all we have because it ends with you hungry for more. And Dan Blank is sailing on promising seas…