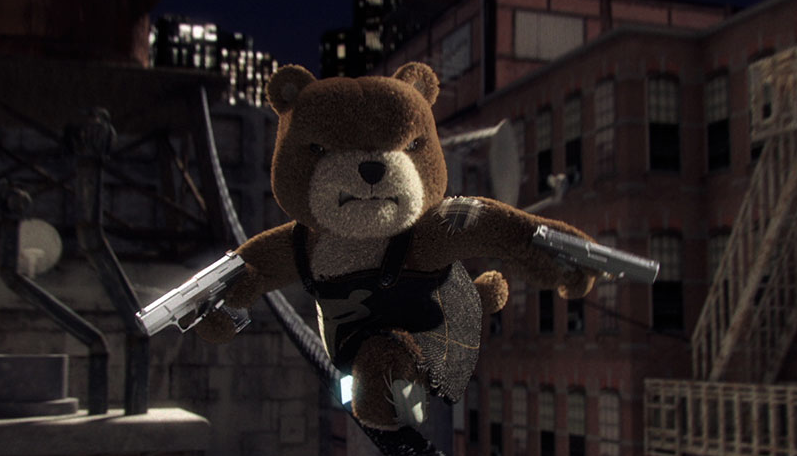 Here is something you never knew you wanted but in the back of your head the need was strong. Move over Woody and the gang over at Andy’s, Toy Story this ain’t. It is fast wheeling and a gritty warfare between Sock Monkeys and Teddy Bears. After all, who hasn’t always wanted to see a Skull Punisher-esque T-Shirt wearing Teddy Bear with a gun? Exactly.

In this web-series, Mega Plush, there is an underbelly to the dark city that no one knows of. An army of terrifying vigilantes are trying to defend their beloved (if bleak) city. The enemy, a society named the SOC Army (Society of Chimps), are poised to take over the city thanks to the ruthless skills of their evil leader. Their masterplan? To take over Plush City at any cost. The aim is to take over Plush Kingdom but there is something stopping them. That is The Mega Plush.

The team behind Mega Plush deem this a labour of love spanning over five years, with Matt Burniston. It’s hard not to see this. The animation is of a stellar quality that looks so authentic and crazily good. This action-packed first episode gives us a great little taste of a series that is high octane even if it is bustling with so many different things. So the story isn’t fully formed yet, well not to audiences anyway. But it the plot goes the same direction as the animation, this is going to be a must see series with epic amounts of followers hopping on the bandwangon. This is an original series with a lot of heart. And much more than that, has bouts of roads to go down and a whole world of fluffy things. Brilliantly crafted, Mega Plush looks all kinds of awesome.

Keep an eye for more episodes. Our cuddly toys have started to pack a punch.