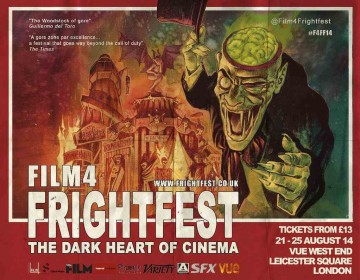 As you know last weekend I was in London to attend the 15th Film4 Frightfest which took place at London’s Vue West End between 21st to 25th August. With over fifty eight features shown over the course of the weekend where twelve countries were represented, there were thirty three UK Premieres, eleven World Premieres, four English Premieres and two European Premieres, so those attending the festival were truly spoilt for choice.

I managed to see twenty four of them and thankfully had the opportunity to see a couple of more prior to the festival which included THE CANAL and WOLF CREEK 2. But, one thing I would say about this festival is that the absence of short films showed with the features were very much felt. However, this isn’t to say that no shorts were shown at all but this year saw all twenty short films shown across two Short Film Showcases. The first ten were shown on Saturday 23rd at 12:45pm and the second took place on Monday 25th at 18:00pm. Both showcases were hosted in the discovery screen where many of the filmmakers were in attendance to introduce their films.

It’s a shame that I didn’t get time to catch the shorts this year but I decided to skip them to see the World Premiere of Simeon Halligan‘s WHITE SETTLERS and the UK Premiere of the third instalment of the popular found footage anthology series V/H/S VIRAL. That said, I hope to catch Jill Sixx Gervargizian‘s CALL GIRL, Christian James‘s GOBLIN, Alex Mathieson and Damon Rickard‘s THE TOUR, and finally SHE from Chesley Burdon and Mark Vessey at some point in the near future.

As well as the films, Frightfest is famous for something else and that is celebrity guests. This year saw Adam Wingard, Simon Barrett and Maika Monroe open the festival with their remarkable film THE GUEST. They were joined at the festival by director John McNaughton (THE HARVEST), actress Essie Davis (THE BABADOOK), director Nacho Vigalondo (OPEN WINDOWS), Till Kleinert (DER SAMURAI), Kevin Kolsch (STARRY EYES), Adam Green (DIGGING UP THE MARROW), Adrian Garcia Bogliano (LATE PHASES), Jessica Cameron (TRUTH OF DARE), Simeon Halligan (WHITE SETTLERS).

Also appearing at the festival was actors Pit Bukowski and Michel Diercks (DER SAMURAI), Rupert Evans and Steve Oram (THE CANAL), Finn Jones (THE LAST SHOWING). However, the guest of honour at the festival was none other than Freddy Kreuger himself Robert Englund who was in attendance to promote his latest film THE LAST SHOWING and to take part in an exclusive Q&A after a special screening of his classic film A NIGHTMARE ON ELM STREET.

Referring back to the films, we had some amazing (and not so amazing) films presented to us. Sadly, it was not possible to watch every single film but it was handy to have a choice between the three screens just in case something did not take my fancy. With this in mind and in an attempt to battle those inevitable post-festival blues I have looked back at the films that I managed to catch during the festival to bring you this list of ten Best of the Fest films. Enjoy.

Chad Archibald crafts a dark whimsical horror with THE DROWNSMAN which explores the notions of lost, struggle and personal demons. I liked the film and although it is clumsy at certain parts I was happy with the end result. As a film it was engaging enough to hold me in my seat and I thought Ry Barrett did a fantastic job as the title character. Overall, the film had more positives than negatives and that fact alone deserves the thumbs up from me.

Simeon Halligan does a great job in the directors seat with WHITE SETTLERS. What appears to be a typical home invasion thriller on the surface, the film borrows elements from such films as Straw Dogs and Eden Lake to deliver a film that provides just the right amount of tension to keep audiences watching without pandering to them. Based on true events this is a chilling yet enjoyable horror.

I thoroughly enjoyed this movie it is a simple yet effective thriller that is expertly directed by William Eubank. Featuring solid performances from the entire cast (and a rather amusing performance from Lin Shay), I found THE SIGNAL highly engaging and somewhat thought provoking as it throws in some spectacular visuals in the final act. I imagine this film would not be to everyone’s taste but this won’t stop me from giving the film credit where it’s due.

Possibly a modern interpretation of Rear Window, OPEN WINDOWS is a film that is both entertaining and thrilling. As director Nacho Vigalondo has crated a film that is rich of tension and looks flawless on screen. I liked this film, it does not lag and I was glad to see that the multi-screen approach never became distracting but served to heighten the overall effect of the film.

Smartly written, superbly acted and nicely directed Kevin Kolsch, STARRY EYES is a film that draws your attention from the get go and takes you on a journey filled with horrific imagery and shocking scenes of gore underlined by a commentary about the more grittier side of casting in LA. The effects reminded me of last year’s Discovery film Contracted about a young girl who contracts a deadly STI from a one night stand so if you have seen that you have a basic idea of just how disturbing this film can get.

Expertly directed by Adrian Garcia Bogliano, LATE PHASES looks amazing on screen and boasts strong performances from Nick Damici (We Are What We Are) and Ethan Embry (Cheap Thrills). Both actors do a fantastic job to bring a sense of realism to their roles but the true star in this film is the special effects. The wolf transformations are both fun and from what I see is done entirely in practical effects and was in the same class as An American Werewolf in London. I simply couldn’t stop smiling.

At first glance Eduardo Sanchez‘s big-foot horror EXISTS was placed lower on this list but the more I thought about it I began to remember how good this film actually was. Sure the performances are less than good but overall the film does entertain with its creative monster effects and interesting deaths. As director Sanchez builds a sense of tension that never truly lets go.

At the time I saw this film there was very little to no content avialable online and I can tell you now that this is the best way to enjoy this film. Therefore I refuse to reveal what DIGGING UP THE MARROW is about but I can assure you that it is Adam Green‘s best film to date. It’s fun, It’s scary and will hold your attention in a vice-tight grip until the end credits roll. So don’t spoil this gem by looking for spoilers online, just sit back and enjoy every minute of it (when you get the chance).

In at number two is Till Kleinert‘s impressive German horror DER SAMURAI. Featuring a phenomenal performance from Pit Bukowski as a sword wielding menace the film takes the audience on a journy thats packed of mystery and carnage. Superbly directed by Kleinhert, Der Samurai has been hailed as a gay liberation film but it looks beautiful on screen. This film may have some very graphic visuals but it still remains an engaging thriller and it is for this reason that I recommend checking it out.

I might be somewhat biased but I think Adam Wingard and Simon Barrett make a fantastic team together. They wowed me with You’re Next and they even managed to exceed my expectations with THE GUEST. Starring Downton Abbey‘s Dan Stevens in the leading role Wingard has crafted a thriller that is packed with many surprises, practical effects and a liquid gold sound track that was simply phenomenal. I still couldn’t stop thinking about this movie throughout the festival and it is for this reason that The Guest takes the number one spot.

That concludes my list of ten Best of the Fest films. Ivan Kavanagh‘s THE CANAL would have made this list but considering the fact that I did not see it during the festival I have chosen to omit it from my list. This said, I would like to mention the following films which certainly deserve your attention.

Bigger, Better, Bolder and Bloodier than the first, DEAD SNOW 2: RED VS DEAD is a prime example of how a sequel should be. Wirkola has exceeded all expectations and keeps up the ante on this excellent comedy horror that will have you in pain from the number of laugh-out-moments in this film. You won’t believe what Tommy Wirkola does with a tank and a sandpit, a crushed ribcage and one hell of a love scene.

Both emotional and heartwarming, Jeff Baena‘s LIFE AFTER BETH is another credible romantic zombie comedy that is really a pleasure to watch. The script is sharply written and the performances from the cast are sound but the true star in this movie is without a doubt Aubrey Plaza as her performance utilises her comedy skills that help her to steal every scene she is in.

Jessica Cameron‘s TRUTH OR DARE pushes the boundaries of acceptability. Its direct mean-spirited approach reminded me of James Cullen Bressick‘s Hate Crime which is also one of the most disturbing films i’ve ever seen. Featuring some truly twisted dares and enough gore to make Hostel look like a saturday television programme, Cameron spares nothing and no one as she crafts a thriller that accelerates in ferocity leaving her audience speechless.

So what about the rest? We’ve talked about the best films shown during the festival so it should only be fair for me to talk about the film which has become my least favourite. That film is…

This movie is awful. I sat through its 92 minute run-time in hope that it might eventually get better but it didn’t. It feels more like someone has collected a bunch of cut-scenes from a computer game and edited them all together to get this mess of a film. So if you ever get the chance to see this one make sure you approach with caution as I certainly don’t recommend it.

[HORROR AND SCI-FI EDITOR] Jon Dickinson graduated from Sheffield Hallam University in 2006 with a Bachelor of the Arts degree in Communication Studies with an emphasis on PR and Multimedia. Since graduating he has contributed to several publications and regularly attends some of the biggest film festivals in the UK including Film4 Frightfest.
You might also like
FeaturesKiller ChordsMovie Lists