In the run-up the final episode, Cinema Chords recently caught up with Charles Baker who you will probably recognise as playing Skinny Pete in Breaking Bad.

In the interview he speaks about the popularity of Breaking Bad, the great on-screen duo that was him and Badger and why the show won at the Emmy Awards.

How did you get involved with Breaking Bad?

Well, I was in Fortworth, Texas and I was called in originally to play the skinny stoner in episode 4 of the first season. I read for the part and luckily they brought me in. Aaron Paul who plays Jesse Pinkman was supposed to die in the first season, but they decided he was too likeable to kill off and so they kept him. They made him a regular part of the show and decided that he needed friends and I was already established as a friend, so they kept me.

Wow, it could have been quite a different show if they killed Jesse.

Yeah, very much so.

Did you expect the show to be such a massive hit?

We knew it was going to be special, but I don’t think anyone could have predicted it to be as big as it was. We had a feeling that it was going to be something pretty cool and we all enjoyed doing it. Making it such a big hit was not necessarily what we were going for, we were just going for a love of the art and what we do. That’s one thing that Breaking Bad is, art.

What do you think it is about it that everyone loves so much?

Well, at least here in the States, a lot of people can relate. We don’t have a universal type of healthcare situation, and here we have a High School teacher who was able to support his family nicely up until the point where he needed healthcare. That’s what turned him, the knowledge that he was about to die and leave his family broke, or possibly in debt after having to pay for his medical bills. A lot of people here can relate to that. There’ also the drug aspect. There’s a lot of people in this country who are affected by drugs; they either know someone who’s into them or know someone who has been affected by someone into them.

Breaking Bad is great at presenting a wholly negative view of drugs. But, Miley Cyrus actually used the show as a way to imply she isn’t as ‘bad’ as a show that teaches how to make drugs. What do you think about that?

Like you said, we don’t promote drugs and we don’t actually show people how to make them. They do use a realistic process but they don’t use it exactly how it would be needed to make meth. Sometimes the ends do justify the means. We feel like we do a good job at portraying what happens when you get into this mess. Even my character, Skinny Pete, on the show, after people saw him play piano in one episode, this is what meth can do to someone who used to be a classical pianist. It changed him into an illiterate junkie who slings meth at rehab centres, you know?

How would you describe your character to someone who doesn’t watch the show?

He’s a very loyal, unfortunate person. I’d like to say he’s just a dumb street-dealer, but really he’s a lost guy just like Jesse. He had something going for him once, but something went wrong and he got in to this drug world. He’s a coward and isn’t quite sure of himself.

Why do you think he’s important for the show? 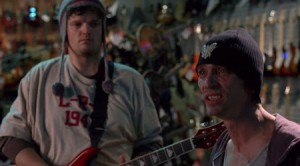 Matt Jones who plays Badger made a point in an interview recently when he said something that I thought was brilliant. He said that Skinny Pete and Badger are there to remind the audience what Jesse would have been if he hadn’t met Walt. Jesse was just like us and we were the three amigos in the beginning and, slowly, as he got more involved in the danger and the heavier side of the business, he started growing up. As you can see from  our last few episodes, Badger and Skinny Pete are still the same dumb, goofy guys who aren’t affected at all by any of it. It’s a good reason to have us there.

Do you and Matt Jones get along as well as you do off-screen as you do on-screen?

Yeah, we get along great. We see each other a lot more now, because I’ve just moved to Los Angeles from Texas. So I go see some of his shows and he’s a really great guy. He’s a lot busier than I am! He’s on a show on CBS and, also, has a live show that he does in LA which is an improvisational musical and it’s hilarious. He’s got a great singing voice, so I go and check out his shows when I can.

What was it like off-stage when you and Badger were filming? Most of your scenes were pretty hilarious.

Yeah, the whole cast and crew loved our jobs so much and nobody took it too seriously. Whenever Bryan and Aaron were off-camera they were having fun and joking and as soon as the cameras started rolling, they would  become the brilliant and dramatic actors that they are. All of us just joked around and had fun while we were on-set. It was like a working vacation for me!

To film, it was the one where Badger and I were discussing Nazi zombies at the beginning of Season 4. That was a lot of fun. It seemed as though we were making it up as we went along because the writers write so well! We understood the material so well, that we just went with it. We had to do it so many different times from so many different angles, that it became more and more fun as it went on.

Do you watch the show yourself, or are you one of those actors who can’t watch themselves?

Oh, I love watching the show! I’ve been a huge fan since the beginning. I’m really not like Skinny Pete at all and so I can disassociate myself from the character I play on-screen and just enjoy it like the rest of the fans.

As you’ve said, you’re obviously not like your character. But, do you share any similarities with him?

Do you know how the show ends?

I don’t, I know nothing! I’m looking forward to seeing how it goes. I saw some of the script for the final episode, but only just a tiny little bit and the rest of it was blacked out. The crew, on the last episode, did a lot of joking around with the cast about how it ended and kept making up different endings so anybody who wasn’t involved really has no idea.

What do you think happens. or what do you want to happen? 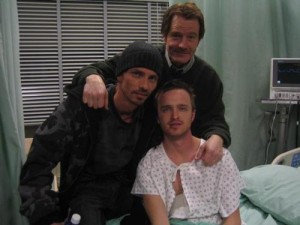 Wow, I’m kind of trying to avoid making up anything because I don’t want to be disappointed when something I want to happen doesn’t. The writers are just so good that you could never guess, and anything that you say will probably not be right. I saw it in the season that ended with the two aeroplanes crashing and they teased it in the season by showing the teddy bear in the pool, and the early cold openings of the show. At the end, after those aeroplanes crashed and everyone realised what that was about, so many people had their own ideas about what was happening that they actually got mad about what happened. A lot of them, after a while, thought “Yeah that was cool, I was just mad because I wanted it to be this…” you know? It’s not my show, let the storytellers tell it and let’s see what happens.

Did you expect Breaking Bad to win the Outstanding Drama award at the Emmys?

*Laughs* You know what, I did. The amount of love and attention this show has been getting lately. It had been passed up for Best Drama for years since we started so I think this was a way of saying, “Hey thanks for making the best show on television.” The writers definitely deserved it.

I have a question for you that someone posted on Facebook: Do you think if the present Walt could go back in time and tell Walt in the past what happens if he makes meth, do you still think he’d do it?

That’s a good question. I think because of his ego, I think he would have tried to make different choices but he still would have ended up in the same predicament. A lot of his choices, even though he kept saying, “This is for my family” you could almost see that it was more to do with his ego. Anytime somebody talked down to him or talked about him being a nice, smart, sweet guy, didn’t acknowledge him as being someone special, he somehow always brought himself back. When Hank thought that he caught Heisenberg in an earlier season and Walt was like, “Well..what if he’s still out there?” That was his ego talking and I think that’s what’s driving him. Even if he knew what was going to happen, he would try and change things and do it this time.

What are you currently working on?

We’d like to thank Charles for his time and hope he enjoys the final episode as much as we do this very evening as it airs on Sunday, Sept. 29 at 9/8c on AMC.

We’ll leave you with one of our favourite recent scenes as Badger explains his Star Trek script idea to Skinny Pete.