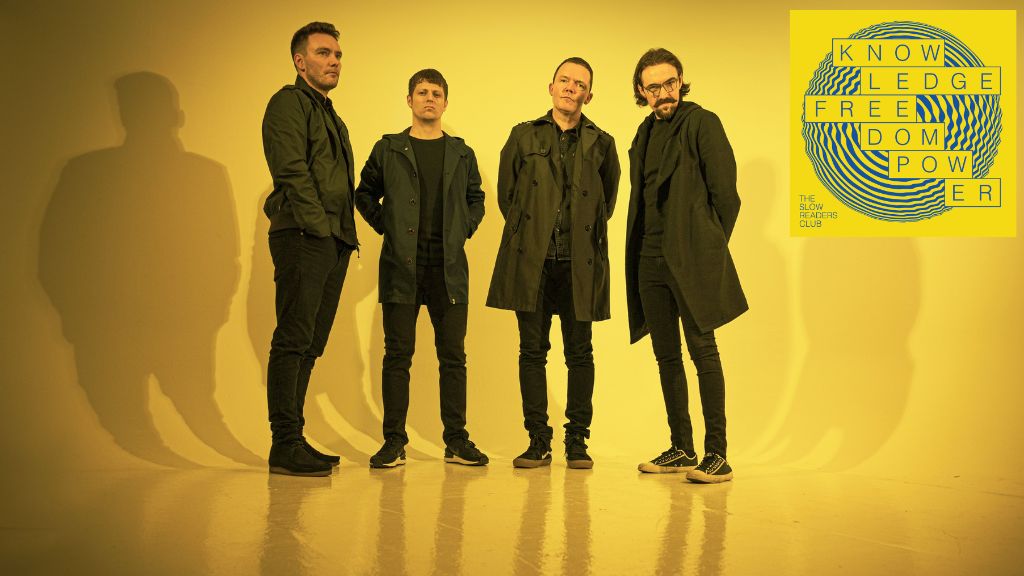 Manchester-based four piece, The Slow Readers Club have today announced that they will release their sixth album, ‘Knowledge Freedom Power’ on February 24th, 2023. In anticipation of the release, the band has also shared the LP’s lead single and eponymous track (available here) which meditates on how there is always an alternative to a world which is becoming increasingly authoritarian and which neglects the needs of the many in favour of the few.

Following up on the success of their 2020 Top 10 album ‘The Joy of the Return,’ the band hit the studio in early 2022 with producer Joe Cross (Hurts / Courteeners) to record what is being dubbed as “a sizzling synth-rock beast of a record akin to White Lies, Muse and modern-day Bloc Party, and a rallying cry of emancipation, both stylistically and socially.”

When lockdown kicked in the same week that ‘The Joy Of The Return’ debuted at #9, The Slow Readers Club reacted to the cancellation of their touring plans by creating a darker, more ethereal set of songs, which they recorded via WhatsApp and Google Drive and by recording one band member at a time in the studio. The result was ’91 Days in Isolation’, which they self-released in October 2020.

Commenting on the band’s approach to music in light of the recent state of affairs, frontman Aaron Starkie says, “The world had got so bleak it felt a little indulgent to paint apocalyptic pictures when they were out in the real world. I thought people would probably want to hear more uplifting things, it was my intention to be a bit more positive. There’s still a lot of melodrama in there and it’s still dystopian in places but there’s more positive shades in this record … Growing up as a council estate kid in Manchester I was very conscious of having a limited horizon and I guess I had a chip on my shoulder and something to prove. It’s that background that inspired both our band name and the album’s title track ‘Knowledge Freedom Power’. It is an exercise in positive sloganeering, a mantra for education as a means of a way out from social and psychological confinement.”

‘Knowledge Freedom Power’ is now available to pre-order HERE. It will be released on blue vinyl, CD and cassette, as well as digital and streaming formats.

The Slow Readers Club recently announced details of their 2023 headline tour (listed below), which has already sold-out its homecoming show at Manchester’s Albert Hall. All remaining tickets for the tour are available HERE.