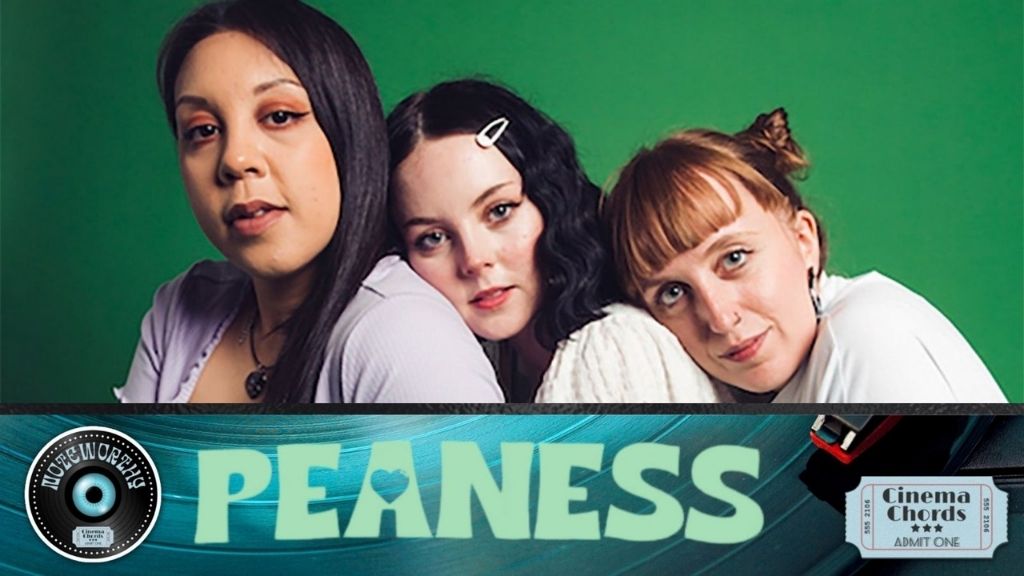 After the brief Easter break, CinemaChords’ Noteworthy is back to shine a spotlight on bands and musicians we’re convinced are destined for great things in the imminent future. And for Episode 13, we’re chuffed to be able to welcome onto the show indie-pop purveyors Peaness.

Originally formed in Chester in late 2014, Jess Branney (bass & vocals), Carleia ‘Balla’ Balbenta (guitar & vocals) and Rachel Williams (drums) first took to the live scene in July 2015 before shortly afterward self-releasing their debut EP “No Fun”, which immediately found instant fanfare over at BBC Introducing, BBC6 Music, BBC Radio 1, et al. Having clocked up extensive radio play and press acclaim from the likes of Kerrang! Magazine, Rolling Stone and Clash Magazine, the band soon found themselves sharing the stage with the likes of We Are Scientists, The Cribs and The Beths and taking their playful power-pop to festivals as far-flung as The Great Escape and Benicasim.

Fast forward five years and 2020 looked set to be their busiest year until Covid reared its ugly head, which meant that their then recently recorded debut album “World Full of Worry” had to be postponed indefinitely. But now, with a sort of new normal on the horizon, 2022 looks set to be the band’s biggest and best year yet, with three back to back singles, “How I’m Feeling”, “Worry” and “irl” having gone down a treat, and the imminent release of the aforementioned album, slated for a 6 May release through their own label, Totally Snick Records.

So, in anticipation of their long-overdue debut long-player, CinemaChords’ Howard Gorman caught up with the band who revealed everything that goes into embracing the homegrown nature of the music they make, how they compare the album with the material they have released to date, and how they have kept themselves busy during the unwonted hiatus.