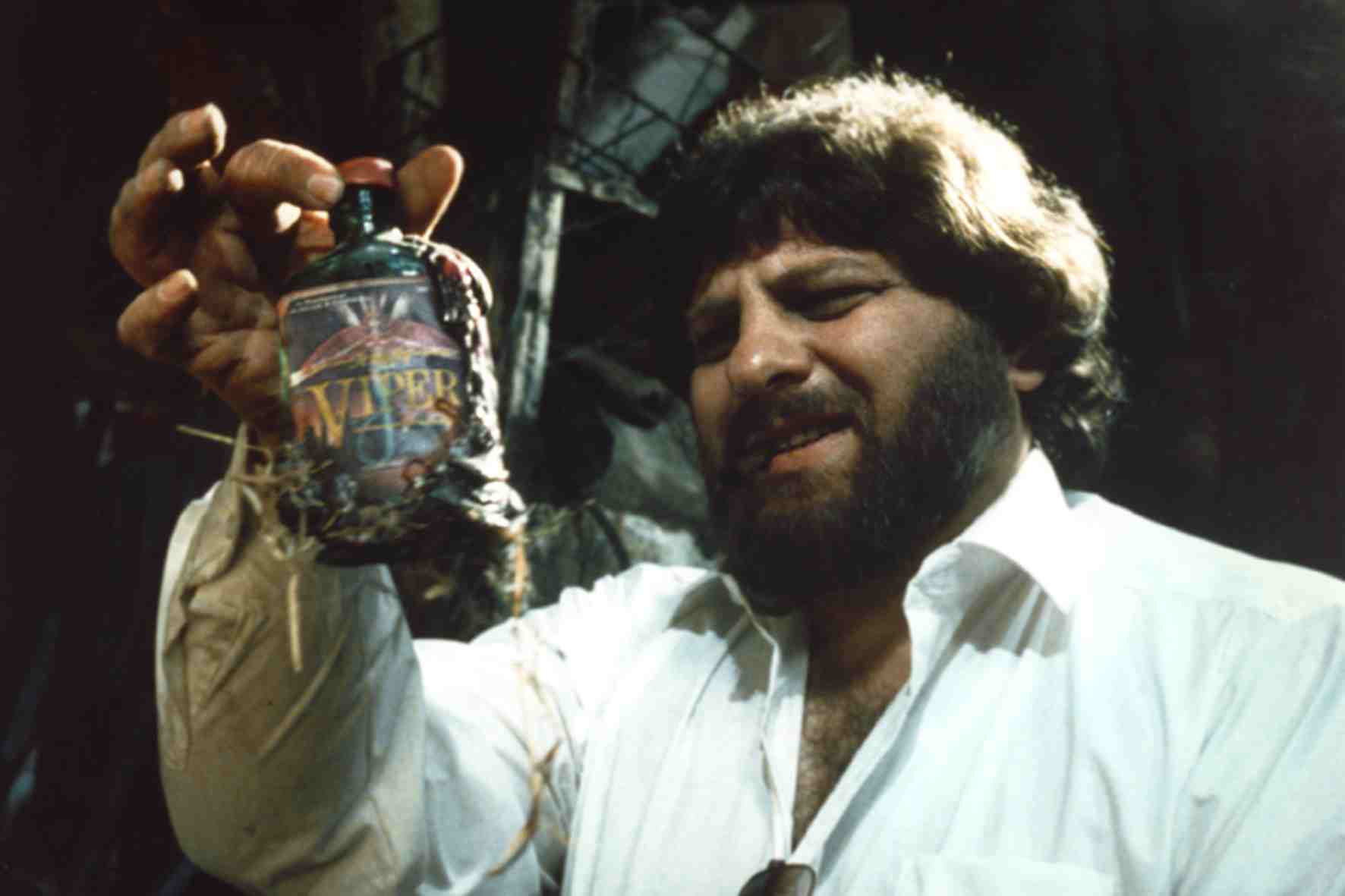 Freddy, Jason and Michael all ruled the roost back in the ’70s and ’80s, slashing everything and anything else that tried to break into the horror genre market in said era. Looking back, some thirty years later, and I can’t help but feel it’s my duty to introduce horror fans to some lesser known ’80s horror classics that still stick in my mind to this very day – horror fare that many of you may not be familiar with. The good news is that one of them has recently been re-released on Blu-ray with another set for the same treatment later on this year. 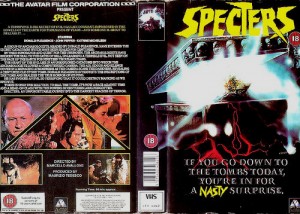 Donald Pleasance had this amazing talent of being able to turn second rate garbage into something so much superior than it really was. Specters is a prime example of said talent.

The film follows a team of archaeologists who, during an excavation, accidentally releasing an evil force into the world via underground catacombs. What’s lacking in plot devices is more than made up for in one heck of a sinister atmosphere, thanks by and large to the sound design. It’s certainly worth rooting this one out if unnerving ‘80s horror floats your boat. 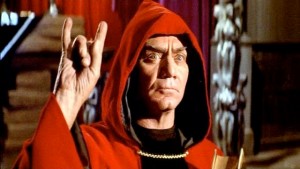 Despite the amazing ensemble cast involved, this little classic didn’t reach anywhere near as much of an audience as it deserved then and still deserves now. Bill Shatner and Tom Skerritt are brothers who find themselves battling it out against a Satanic cult led by Ernest Borgnine. Watch closely towards the end and you’ll even see a startlingly young John Travolta playing one of Borgnine’s proselytes.

The main protagonist in this film here is technical supervisor Anton LaVey. ‘80s horror movies served up some serious melt effects and The Devil’s Rain provided this in bucket loads of ooze. No sooner has the film started and we see the brothers’ father stagger in from a storm bubbling away and breaking into bits before ultimately turning into a puddle of sludge. The melt and slime goodness goes on for pretty much the entire duration of the film, culminating in a lengthy sequence with the cult members dissolving left right and centre. 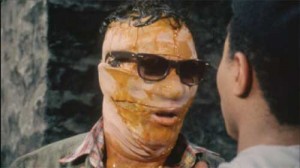 Let’s keep melting and cults the central theme as we move on with the next film in the list, Slime City.

The film follows a young man, excited about moving into a new apartment. Little does he know is that said apartment is in a building owned by members a cult of ectoplasmic body possessors.

The building’s rather diverse dwellers trick him into becoming a vessel for Zachary, the cult’s original leader. He soon finds himself suddenly melting and the only way he can restore his natural beauty is not by popping slices of cucumber on his eyes but rather by giving in to his newly found homicidal cravings.

Prepare yourself from some pretty hilarious yet horrific effects (and acting, although it’s so terrible it’s actually laugh-out-loud enjoyable).

A sequel, Slime City Massacre, was released in 2010 but sadly just doesn’t live up the original’s sliminess, although the acting is pretty much on a par. 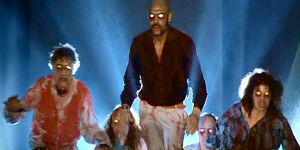 Plot holes aside I’m going to come out and just say Lamberto Bava’s Demons, or Demoni, is probably one of the most horrifying movies I’ve seen to date. Maybe that statement comes from the terrifying memories I have of experiencing this movie alone at a tender young age but I recently dared myself to watch the sequel and I have to admit it resuscitated some of the most frightening memories.

Whilst Bava certainly can’t be credited for having come up with an original plot or even a plot at all, he managed to create a film was packed full of so much tension and mayhem that that fact becomes totally immaterial. Considering the movie was shot on such a low budget, these ‘80s demons couldn’t look scarier and certainly scared me more than anything I’ve seen recently. To give you an idea, my nightmares are still haunted by the chap in the middle of the image above.

The monster effects combined with the terrifying setting  – an actual cinema – work a treat. I’m just so glad I never actually went to the cinema to see this or I don’t know if I would have been able to sit it out to the bitter end. Why set in a cinema you ask? Well the plot basically involves a group of people attending a midnight screening of a horror movie called Demons after receiving invitation flyers. As the audience sit down to enjoy the film, it appears that exactly what is happening in the movie they are watching starts to happen inside the movie theatre. If that wasn’t problematic enough, as soon as people start turning into Demons the remaining survivors discover all exits have astonishingly been bricked up.

Kudos to Bava for emphasizing everything audiences enjoy about horror films. You might find yourself laughing at first at the dodgy dubbing but once things start getting gnarly this film will have you thinking twice and thrice before heading to your local cinema to watch another horror movie.

Good news part one: This movie is slated to for a Synapse Films Blu-ray release on October 29th this year. 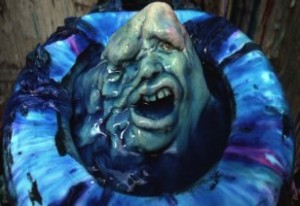 Describing the film, screenwriter Roy Frumkes said, “I wrote [Street Trash] to democratically offend every group on the planet.” If everyone on the planet had seen the film back then, I’m sure he couldn’t have been more right. It’s such as shame that wasn’t the case as this is one of THE strongest memories imprinted on my brain from the ’80s.

Pretty much everything about this film crosses boundaries for the sake of doing so but all the bad taste is executed with such good taste – beheadings, necrophilia, rape, vomit, and a see-it-to-believe it game of catch with a man’s severed penis as the poor chap runs around trying to recover what’s been taken away from him.

Without spoiling too much for those yet to see this masterpiece, the plot revolves around a crate of expired booze, called Viper, which is sold off at a local off-licence to tramps for a dollar. Little do the poor chaps know that as soon as they take a swig of the stuff they are in for a melt in your mouth and not in your hand surprise.

Whilst the previous melt movies mentioned here were pretty stunning for the time, it has to be said that Street Trash provides you with the most unique and grotesque effects ever put on film. Bodies melt, explode, and disintegrate with the most vibrant bursts of all the colours of the rainbow slime. At the same time it’s so clear that the makeup team behind all the gore had a whale of a time and the plasticine cartoony effects add so much more to the fun whilst never, never, never detracting from the sheer horror the film recreates.

Good news part two: Street Trash was released last month on Blu-ray by good old Synapse Films so get it while stocks last.

Obviously there are oodles of classic horror films from this era but these are five that really stood out for me during my teen years. If you have an avid penchant for ‘80s horror movies than these are certainly worth tracking down to give them the viewing they deserve.

In this article:eighties, horror, seventies