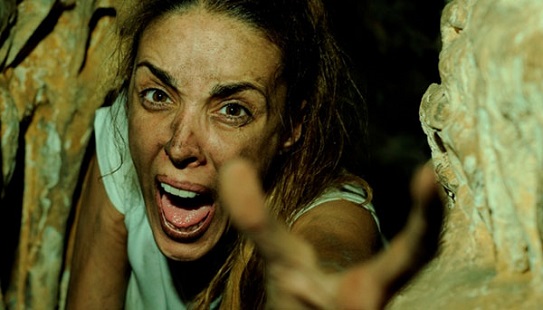 An extreme survival thriller stirring up more than a bit of buzz recently at the Malaga Film Festival and the Miami International Film Festival is Spanish Director Alfredo Montero’s latest feature film, In Darkness We Fall (La Cueva). Sharing common denominators with the likes of The Blair Witch Project, The Descent, or fellow Spanish genre film, Rec, Montero defines his latest project as “a zombie movie with no zombies.”

With a script Montero co-wrote with Javier Gullon, the mind behind the astounding The King on the Hill, and more recently Denis Villeneuve‘s Enemy screenplay, In Darkness We Fall follows five friends as they head off on their holidays to the idyllic Spanish island of Formentera. No sooner have they arrived on the island they go off exploring and stumble upon a cave hidden on a cliff side. Their intrigue obviously gets the better of them and they can’t help but head off into the darkness to investigate. The young explorers soon realise just how lost they are in the labyrinthine caves and nights in complete darkness turn into days. With no way of communicating with the outside world and with nothing to eat or drink the friends have to make the most unimaginable decision of their lives.

Describing the characters in the film Montero explained:

“There are no good guys and bad guys, just normal people who are driven to extreme measures due to severe dehydration, disorientation and the darkness in which they find themselves. Only when faced with impending death are our most wild and primal instincts drawn out of us.”

When it comes to found footage the onus is certainly on filmmakers to reinvent the wheel and Montero certainly put himself, and everyone involved, to the challenge as he wanted to ensure his cast gave the performances of their lives to make audiences really feel involved and to experience the same terror as the characters. This reality was obtained with the most extreme shooting conditions imaginable. The cast and crew filmed in mile-long, muddy labyrinthine galleries in total darkness with stalactites and stalagmites sticking into them left, right and centre. The conditions were so extreme that some even had to resort to anxiety meds to calm themselves down after enduring the brutal 12 hours a day underground shoots, not to mention the hundreds of bumps, bruises and scars Montero says the cast and crew will carry with them forever.

Whilst no release date has been confirmed just yet, the film will be distributed internationally by Filmax International and will inaugurate this year’s Bilbao Fant Festival in May with the cast and director in attendance. We will be covering the event so stay tuned for a review and further details. In the meantime, we’ll leave you with the latest trailer for the film.

In this article:In Darkness We Fall, La Cueva