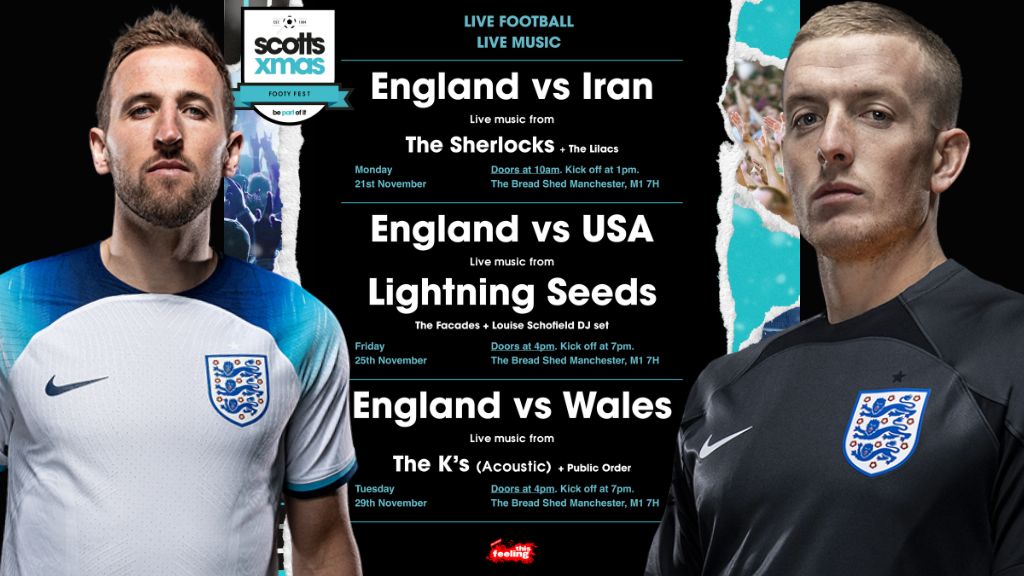 scotts, the menswear specialists which serve clothing to a number of unique cultural movements across the worlds of sport and music, have kicked-off their Coming Home 4 Christmas campaign today with the announcement of three special Xmas Footy Fest shows which will take place at Manchester’s Bread Shed.

These events are not to be missed as each on will see a high profile band and a rising new talent help you all warm up before the whistle blows for each of England’s World Cup group games a little later this month.

All proceeds from the ticket sales will be donated to Mind, a mental health charity that provides advice and support to empower anyone experiencing a mental health problem, and that also campaigns to improve services, raise awareness and promote understanding of such issues.

The three events announed today are as follows:

The Sherlocks (recent interview with them here) hit the Bread Shed for their most intimate Manchester show in years, having recently sold-out the much larger O2 Ritz – a gig which Louder Than War observed, “Their live intensity and keen sense of melody make the Ritz erupt with mayhem – beer is flying and hands flail in the air.” Get down early to catch The Lilacs, the Wigan indie-poppers behind ‘Sally’ and ‘Vicarage Road’.

Who better to get us in the mood than The Lightning Seeds with their ultimate England anthem ‘Three Lions’ and other big hits including ‘The Life of Riley’ and ‘Pure’? We’re well past thirty years of hurt, but we’re once again dreaming. Openers The Facades have a similar flair for timeless songwriting and classic indie melodies, all topped by the star attraction that is Alannah Webb’s vocal gift. And on the decks is TV/radio presenter and new music aficionado Louise Schofield.

Just like Euro 2016 it’s time for another England versus Wales showdown – and there’s competition on stage too. First up, representing Wales is Public Order, whose throwback ’90s sound spans everything from rave to Britpop. And then in the England corner are The K’s (recent interview with the band here ), whose urgent indie-rock with a punk edge will take on a more intimate atmosphere as they play a rare acoustic set.

You can nab yourself tickets HERE, whilst stock lasts, but be quick as as they’re sure to sell like hot cakes.

scotts’ Coming Home 4 Christmas campaign promises much more yet to come, with big names from music, football and film all getting involved to bring you the latest designs from scotts’ new Matchday Collection as well as their extensive autumn/winter 2022 catalogue.