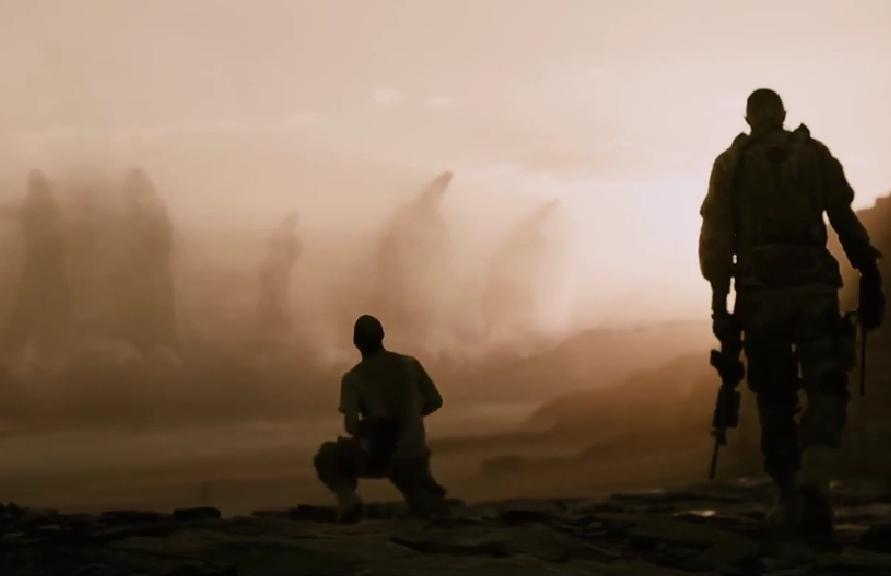 With Gareth Edwards’ latest monster movie, Godzilla hitting cinemas around the world today is obviously the most appropriate time to unleash the first official trailer for Monsters: Dark Continent.

Whilst Edwards’ neither wrote nor directed the sequel to his 2010 original, both he and Monsters star Scott McNairy are both credited as Exec. Producers. With Tom Green (Misfits) occupying the director’s chair this time round and a script penned by Jay Basu the previous teaser trailer highlighted the duo’s decision to hand over importance to the monsters themselves in the light of criticisms as to how the first film had deprived audiences of scenes with the actual invaders.

That said, this first full-length trailer places 99% emphasis on the human side of things leaving any monster sightings until the very end.

Set 7 years after the original film, with “Infected Zones” having spread worldwide, Monsters: Dark Continent takes audiences to the Middle East. With American soldiers sent all around the world to protect US interests, Dark Continent follows one soldier sent on life-altering mission to find a soldier who has gone rogue deep in an Infected Zone.

The film stars Joe Dempsie (Game of Thrones), Johnny Harris (Snow White and the Huntsman), Nicholas Pinnock (Captain America: The Winter Solider), and Parker Sawyers (Jack Ryan: Shadow Recruit). Monsters: Dark Continent doesn’t release in the UK until September but we can all soothe our monster munchies for now with today’s release of Godzilla.

We’ll leave you to enjoy the aforementioned full-length trailer.

In this article:Monsters: Dark Continent