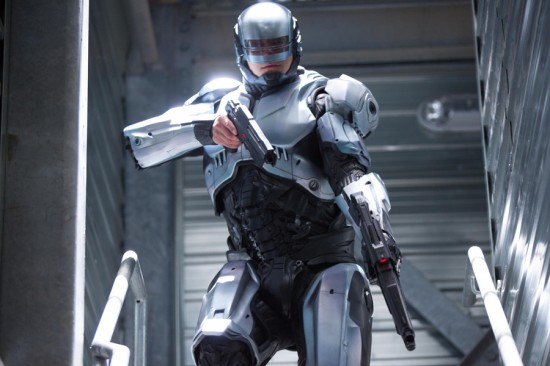 Based on the trailer we think it’s safe to say that the new suit(s) are not the Dark Knight’s hand-me-downs everyone was complaining about and the storyline looks to mix up the 1987 original somewhat rather than being a straightforward revamp. Mind you, that was pretty much to be expected considering the writers on board: Josh Zetumer who has written the upcoming Juan Carlos Fresnadillo and Shia Labeouf team-up film Villain, and Nick Shenk (Gran Torino).

Both Kinnaman and Oldman will also be appearing together in Daniel Espinosa’s Child 44 some time next year alongside Tom Hardy and Noomi Rapace. The film is set in Stalin-era Soviet Union with a disgraced MGB agent investigating a case involving a series of child murders with the trailer of clues taking him to the very top of party leadership.

Back to the matter in hand though. RoboCop will take to the streets in 2014 as the reboot is set to reach the UK on the 7th of February. We’ll leave you with the aforementioned trailer. Your move, Creep.

In RoboCop, the year is 2028 and multinational conglomerate OmniCorp is at the center of robot technology. Overseas, their drones have been used by the military for years – and it’s meant billions for OmniCorp’s bottom line. Now OmniCorp wants to bring their controversial technology to the home front, and they see a golden opportunity to do it. When Alex Murphy (Joel Kinnaman) – a loving husband, father and good cop doing his best to stem the tide of crime and corruption in Detroit – is critically injured in the line of duty, OmniCorp sees their chance for a part-man, part-robot police officer. OmniCorp envisions a RoboCop in every city and even more billions for their shareholders, but they never counted on one thing: there is still a man inside the machine pursuing justice.