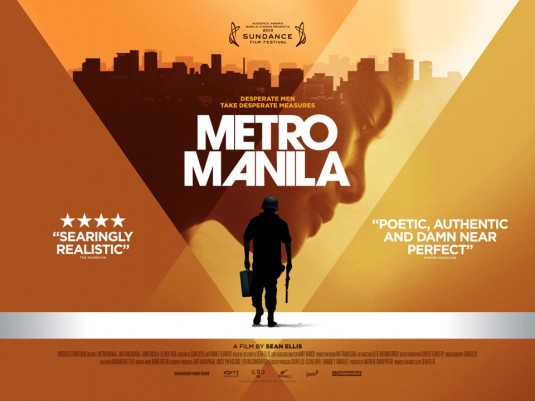 Vue Entertainment are putting on a special nationwide charity screening of the recently released crime thriller Metro Manila in aid of the Philippines appeal following the devastation caused by Typhoon Hiyan.

Directed by Sean Ellis, Metro Manila is an action drama that follows Oscar Ramirez (Jake Macapagal) whom after seeking a brighter future in the megacity Manila falls prey to manipulations of its hardened locals. He catches a lucky break when he is offered steady work but the reality of his work’s mortality rate and the somewhat questionable motives of his new partner force Oscar to confront his own decisions. Due to the praises given to it by critics, Metro Manila has been selected as the British entry for the Best Foreign Language Film Oscar® at the Academy Awards in March next year. Doesn’t get any better than that.

Tickets are £10 and one hundred per cent of the proceeds will go straight to DEC’s Philippines Typhoon appeal (www.dec.org.uk). The screenings are also supported by UK distributor, Independent Distribution, with materials supplied by Arts Alliance Media.

For more details and to book head over here.

If you are unable to attend but still wish to donate to the Disasters Emergency Committee (DEC) Philippines Typhoon Appeal you can do so right here.