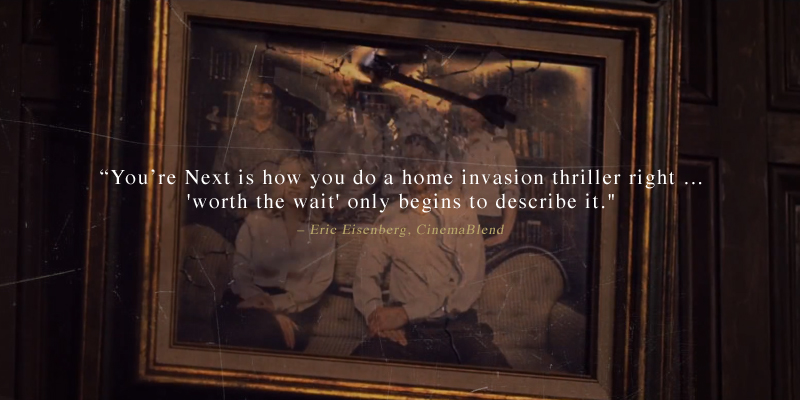 The horror genre’s a peculiar beast. Every other minute yet another film pops out of the woodwork, defined by all and sundry as (to use that immortal term) “a game-changer.” Halloween begat Scream begat Blair Witch begat The Cabin in the Woods – it’s a familiar practice that occurs more often in horror than in any other movie genre. Perhaps this can be attributed to the abundance of subgenres: where comedies are divided into a maximum of about four categories, (rom-com, musical, fratboy and spoof), horror has more than you can wield a chainsaw at: supernatural, satanic, found-fiction, comedy horror, zombie/vampire/monster movie, “gore-nography,” slasher, and the one that’s been around as early as the ‘50s (with The Desperate Hours and Wait Until Dark) – the home invasion movie.

You’re Next is the latest home invasion flick to get everyone abuzz. Though the trailer would suggest it’s no different from your average horror of its kind (masked assailants, shots of shadows, lots of screaming), there’s evidently more to this one than meets the eye, with enough plot twists and genre-subverting to keep things fresh. To commemorate its release, here are a few of the best home invasion films to hit cinemas over the last couple of decades.

Fincher’s first film following the smash-hit modern classic Fight Club was bound to receive a mixed response – creating anything after such a universally acclaimed look at stifled angst amongst contemporary males was bound to be a tough task. Yet Panic Room is a classic in its own right, perhaps not of horror, but of high-tension thrillers. Inspired by the emerging fad of actual panic rooms at the time of its release, Fincher’s film sees the newly-divorced Meg (Jodie Foster) and daughter Sarah (a pre-Twilight Kristen Stewart) take refuge in their new home’s safe quarters, the panic room of the title, when intruders Jared Leto and Forest Whitaker force entry. Sadly for Meg, they only want access to the panic room itself (there’s a safe inside it), and to make matters worse, diabetic Sarah needs a glucagon shot.

As expected from Fincher, it’s a bit of a rollercoaster from start to finish, and despite a somewhat muddled script, the action remains exhilarating throughout. Furthermore, it’s an apt depiction of the widespread paranoia and mistrust that permeated the early ‘00s post-9/11, and in situating the thriller scenario in a family home, the film’s events are made to seem highly, disturbingly plausible. Worth watching for Foster’s performance and Fincher’s direction alone. 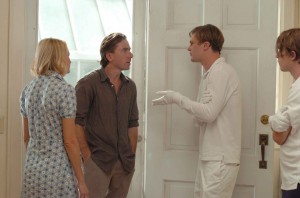 The plot of Haneke’s Funny Games (either version) is simple: a wealthy family, George, Anna and their young son Georgie, are on holiday at their lake house.  Two young men, Peter and Paul, arrive at the house asking to borrow some eggs, and after “accidentally” breaking an egg or two, submit the family to a series of sadistic games, knocking them off one by one in the process. On the surface, it’s just like any other addition to the subgenre, but in Haneke’s hands it’s an entirely different entity. Funny Games doesn’t just break the fourth wall but hurls a sledgehammer through it, shattering our comforting illusion that what we’re watching is entertainment of any degree. Peter and Paul continuously show awareness that they are characters in a movie, winking and smirking at the camera on occasion, and stating their intentions of following standards of movie plot development e.g. Paul points out that he hasn’t murdered the characters yet because the film needs to reach feature-length, demonstrating acute awareness of the audience’s expectations. In one particularly memorable scene, Anna attempts to fight back against her captors, scooping up a conveniently placed shotgun and shooting Peter dead. A frustrated Paul reaches for the remote control, and literally rewinds the film to a moment before Anna can reach for the gun, reminding her she must adhere to “the rules” of film convention. From this moment on, we know this is no ordinary movie, and that we have no idea what to expect.

It’s this innovative approach that makes what could be an extremely straightforward piece so disturbing. We can’t fall back on our expectations because we no longer have any. We can’t rely on plot devices because the plot could twist any which way it likes, and what we’re left with is a stark commentary on the horror genre as a whole. By inviting us to question what we’re watching, and furthermore why we want to watch it, Haneke leaves the viewer feeling both like we’re being tortured and that we’re doing the torturing ourselves: an extremely skilled accomplishment. 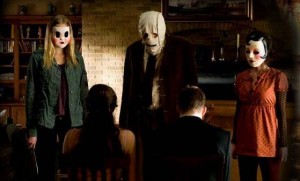 Despite its low budget and obvious flaws, there’s something about The Strangers that sticks. The film sees boyfriend and girlfriend Kristen (Liv Tyler) and James (Scott Speedman) retreat to James’s family home in the woods (of course) one evening following a botched proposal. It’s a great way to kickstart the action, given the chillingly awkward atmosphere between the two protagonists in the opening scenes: no cheery enthusiasm or cheesy declarations of how happy they are, just uneasy silences, upping the tension from the start. Then a knock at the door: “Is Tamara home?” And the action really begins.

Both Tyler and Speedman give tremendous performances, but it’s Bertino’s direction that makes this film such unbearably frightening viewing. Wide shots of the living room with creepy masked assailants peeping out nonchalantly from corners had viewers gasping and even screaming in initial screenings. The drama doesn’t explode into life but gradually unfurls, and as the film drives towards its grisly conclusion, at some point you’ll no doubt be genuinely exhausted from being so petrified. Perhaps it’s the simplicity of the strangers’ task at hand that really lets this film stand out against the plethora of other similar flicks: the ease at which they carry out their destructive business, and the sterile nature of it. Case in point: when a blubbering Kristen, scared senseless, asks outright, “Why are you doing this to us?” the response is stark, casual and unbearably haunting, the horrifically honest: “Because you were home.” 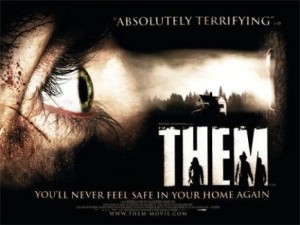 Often cited as the influence for The Strangers, Ils is French director David Moreau’s unsettling home invasion thriller that keeps the tension at an all-time high. Once again, a couple, Clementine and Lucas, start to hear noises in the night, and head out to investigate, only to succumb to the mercy of anonymous assailants in hoodies. The film has everything the average home invasion film ought to: bumps and bangs off-camera, intruders we barely see, and the ominous “inspiré de fait reels” in the trailer, but it’s the excruciatingly suspenseful atmosphere Moreau creates that differentiates this one from the others. What’s more, we find out less about the “them” of the title than in any other home invasion film: where The Strangers puts its antagonists centre-stage, Ils’ strangers are shot through keyholes and doors alone, once again proving that bad guys with no motive is far more bone-chilling than any knife-brandishing nutjob. What’s more, there’s a welcome twist at the film’s finale, and like the film it allegedly inspired, a thoroughly unnerving line from the insane assailants: “They wouldn’t play with us…” that makes this film French horror at its finest. 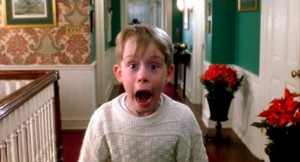 A slightly lighter addition to this list, it’s genuinely pleasing to see a victim of home invasion get their own back for a change, and what’s more, emerge entirely triumphant despite being only eight. Macauley Culkin stars as Kevin McCallister, accidentally left behind over the Christmas period as his (somewhat absentminded) family head to Paris for the holiday season. At first, Kevin’s got little to worry about beyond eating junk food and tobogganing down the stairs, until a duo of thieves (Joe Pesci and Daniel Stern) attempt to break into the family home, and Kevin has to act fast, constructing a series of Wallace-and-Gromit-esque traps to stop the bandits in their tracks.

A much-loved classic, and to this day, the highest grossing comedy ever, Home Alone made a household name of its star Macauley Culkin, annihilated box office records, and spawned a cluster of rubbish sequels. Although it’s Culkin’s performance that carries the movie, the plot hums with creativity: never before has the concept of two grown men being tortured been rendered hilarious family viewing. We’d like to see Kevin pit his tactics against the intruders from The Strangers and see how they’d fare getting tarred and feathered like Joe Pesci. Presumably they wouldn’t get further than the door, let alone axe their way through it.

You’re Next is released nationwide on Friday 30th August, and you can check out the trailer here.