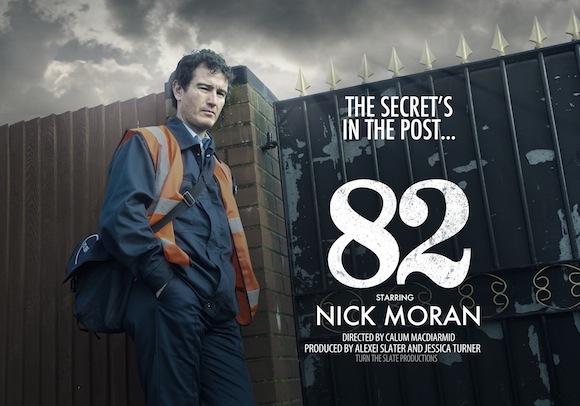 Being a postie must open your eyes to a lot of things, right? You spend your days constantly on your feet – trudging from door to door – and interacting with these lives at a fleeting glimpse, wondering what reaction those will have to your deliveries. You probably know those people better than their loved ones. After all, an eviction notice or bill spells “money trouble on the front page” and a birthday card might solicit money for the penny pinching post-man. Unless you live on a friendly street, you’ll probably never know the high-vis jacket wearing paper Santa Clause.

Which is a considerable advantage for our postie in darkly humorous short 82, named after one of the houses in this typical suburbia that has hidden secrets. Stuck inside his head, something that no one ever hears, this Postie’s perverse and cocksure antics as he ventures down Feltham Street unravels more secrets tussled beneath the surface. And this prick will twist the knowledge of whatever is lurking in packages to his favour. Starring Nick Moran and directed by Calum MacDiarmid, this is a daring and inventive British flick.

This geezer pleaser is definitely a highly innovative and slick piece that enthuses this excellent comedy with a mean streak. The look and tone of the film is largely down to its technical brilliance of the shots. Slipping from drawn out and slow motion shots to sped up sequences as though the film was buffering, the lingering and then onto the rush gives the film a flare of excellence. Vivid and brilliant, what MacDiarmid achieves is the fast and fresh dark comedy film is fantastic and exuberant.

Utilising Alexei Slater’s script, the dialogue and story is equally rapid and smart, the words feel fresh when wrapped around Moran’s tongue who is able to convey a level of cockney jest as well as malevolence that prove how embittered he has become and uses people for kicks. His narrative highlights his characters jovial yet mean inner monologue is both hilarious and shocking,

82 is engaging right to the retribution at the end and has a dry comedy beat throughout it. It has score multiple awards throughout the festival circuit and hopes to achieve may more.

82 is now available on iTunes!