All our favourite nostalgia-filled ’70s, ’80s and ’90s shows are very much a part of the zeitgeist right now and with Dax Shepard’s riotous riff on a particular favourite childhood series of mine, “CHiPs,” all set to cruise into cinemas this Friday, March 24, Warner Bros. has unleashed another exclusive clip asking Jon Baker (Shepard) just exactly why he thinks he’s CHPO material …

Penned, helmed and starring Dax Shepard as Jon Baker and Michael Peña as Frank “Ponch” Poncherello, CHiPs: LAW AND DISORDER finds the duo joining the L.A. California Highway Patrol (CHP) but for VERY different reasons. Baker’s a beaten up pro motorbiker trying to put his life and marriage back together whilst Poncherello is a cocksure undercover Federal agent investigating a multi-million dollar heist that may be an inside job — inside the CHP.

The unlikely duo find themselves teamed together, clashing more than they click, but with Baker’s bike skills combined with Ponch’s street savvy they might just be able to make things work…if they don’t drive each other crazy along the way.

CHiPs: LAW AND DISORDER IS RELEASED IN CINEMAS ON FRIDAY. Blip the throttle and enjoy the clip below.. 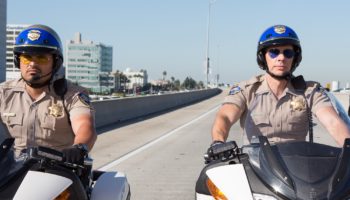