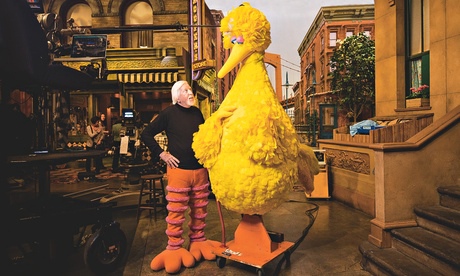 “Who doesn’t know who Big Bird is?”

Never a truer word has been said as it echoes around the documentary of I Am Big Bird. Any child growing up with a television will attest to that, the yellow ball of feathers and fun took us through a spiralling world of education. Sesame Street was a pivotal part of growing up. I still remember rushing home from nursery, sitting my chubby butt down and munched on cheese sandwiches as I lapped up all I could from the American show. As adults, we still watch clips and moments from the series just maybe with a Starbucks latte on our iPads. There hasn’t been a show like it. And at the helm of that is Big Bird, who was evocatively portrayed by the excellent character puppeteer Caroll Spinney.

“The first puppet show I ever saw was by students. I was five and it was three little kittens who had lost their mittens and had no pie,” says Spinney, taking a few moments of his day to talk to me over the phone and seas. The artist, who has spent 46 years portraying both Big Bird and Oscar the Grouch on that acclaimed street, had been immersed in the world of puppets from a young age. “I was eight when I got a monkey puppet for five pennies and my mother had made this felt snake. I built a little puppet theatre and was charging outside the mart for people to watch. I made two cents. Well, I thought I was going to be rich.”

Immediate support came from his mother, who was born in Bolton and had been inspired by the Punch & Judy shows in Blackpool Pleasure Beach. Moving to USA and Canada, never really knowing her own mother, had invested her time, passion and love into Caroll and his siblings. “Unbeknownst to me, she made me Punch & Judy puppets and a theatre with help from my brother (an unwilling helper, I think) for Christmas and my birthday. Its right after my birthday – that’s why I have my name, my mum was on the kitchen floor all through the night. Anyway, under the Christmas tree, over this silk blanket was this home-made theatre and I was thrilled. Little did she know she was giving me my career.”

His mother was an active part of his career up until she died aged 91 and despite an initial turbulent relationship with his father, both grew up proud of their son, Big Bird and Oscar the Grouch. “I gave them a bunch of postcards with Big Bird on them and they’d go up to children sitting in shopping carts at supermarkets. They’d say ‘We’re Big Bird’s Mummy and Daddy’ and the kids must’ve look at them like they are crazy because he’s a bird and they weren’t!”

“Dad was upset that I wouldn’t go into the factory,” Caroll carries on in his soft spoken voice but admitted that his father would eventually grow to support his career which took him to the Air Force one and local television. “I was 21 when I had my own puppet show on the Vegas Strip and I made about $10 a week. I was also shipped to Germany who were happy despite the fact we bombed them. But it was really television that I wanted to get into and eventually, I did.”

After attending a Puppet convention, years after working Bozo’s Big Top and in a trope wth friend Judy Valentine, he was discovered by Jim Henson who invited me to work with The Muppets and his new show – Sesame Street. “Jim Henson was a wonderful creator of great puppetry,” says Caroll when talking about the characters he plays most famously – Big Bird and Oscar the Grouch, “He’d seen me performing and decided I should play with him. So we developed the characters together. For Oscar, he was based on a grouchy waiter that Jim once had. His voice came from a taxi driver with a lot of colour. As for Big Bird, he started off really goofy. He had to be a big kid, discovering the world such as the alphabets and such.”

Caroll has been playing the roles for 45 years. In fact, the show has just finished filming its 46th anniversary series which will show in autumn. At one point, he had wanted to leave because he was unhappy with the move and feeling like he didn’t belong. But despite this, he carried on and has gifted us with an engaging rich character. “It started off as an experimental show – how children can learn through television – and it didn’t test well. But it gradually got awareness because children related well to it.” Spinney continues as he talks why the show is still going strong and his characters are still popular today. “You know 1900’s to 1945, which is the same period, saw such huge changes.  We’ve been to the moon, terrible wars with no sign of stopping, and people have to react to the changes. The show has evolved with all this colour. But I think the real heart of it is that it’s just as funny as it is educational. I think that’s really important.”

His career has been surrounded by different types of characters, he has never felt the pull to play someone else or bring in a new addition to his puppetry portfolio. “I did have two different characters on the show but they didn’t stick. Which was probably for the best. I wouldn’t want to add any now as I’m retired, though I still do those too. I am enjoying living this lifestyle. I have acres of land. I enjoy doing my painting, ” he says as he begins talking about his happy idealistic lifestyle surrounding by his wife Debra. You can hear her laughing and pottering about in the background which conjures this incredible image of blissful married life that has longevity and strength. She’s apparently washing in preparation for a big family visit. “The best thing was marrying Deb and then Big Bird. I married into the most wonderful family. There’ll be sisters, brothers and children and grand-children. A whole new batch coming. It’s wonderful.”

The documentary showcases some testaments to Spinney’s character and it’s a glorious watch to see all the great things people have said about the talented and passionate man. “I think it’s been a wonderful journey and seeing it on the big screen was – wow. When they first offered it to me, it seemed strange but it was worthwhile in the end.”

“It’s hard to feel it. It’s so overwhelming,” says Spinney as he is graciously thanked by this reporter for his dedication to thousands of children globally who have been inspired by Big Bird, Oscar and Sesame Street. “When we started, within a year we had nine million children watching a day in America – not counting Canada – then 14 million. It went to England, and the woman thought it was ‘too American.’ Then Russia had it’s own equivalent of Big Bird. Kuwait had a twisty candy because you cannot have graven images and unfortunately, the filmmakers were taken off air by Saddam Hussein. Israel had their own show with Israelites and Palestinians, it was the only place where they were getting along.” I feel we’ve been through it with children all over the world.”

It’s time to wrap up but as I say my continuous thanks and admiration for Spinney, two characters pop up to say thank you – Big Bird and Oscar The Grouch!

“Thank you very much. Have a nice day, Sarah” says Big Bird making my heart sore (and a little tear) whilst Oscar the Grouch tells me to “Have a rotten day!” which prompts an argument between the pair.

“Don’t say that to the nice lady. I can’t believe you said that” says Big Bird before saying, “Thank you very much Sarah!”

Which is proof that even at 26, a girl can still be amazed by the incredible Caroll Spinney!

I Am Big Bird is out on DVD June 1st.

In this article:Caroll Spinney, I Am Big Bird