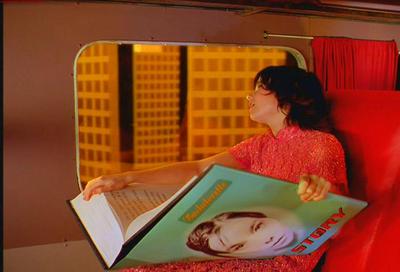 Arguably, everybody in the entire world has probably seen a short film. It all depends on your outlook of the genre. If an advert is crafted well, it can become this mini story of epic proportions only with an agenda to sell you stuff (which, with the abundance of product placement and the state of blockbuster films, is pretty much what features do anyway…cough cough…Frozen.) But what about the music video? Now, we’re not talking about the ones where girls in scantily clad outfits grind up against men in da club or the ones where boybands dance around yachts and islands talking about gorgeous ladies.

I’m talking about the music videos that tell a story alongside their songs. One of the few artists who utilises the art of the music video, whilst roping in some of the best directors around, is Bjork. She carves out some of the most excellent pieces of art that transcend just representing the music and becomes this mini-films of brilliance. Though there are many of her music videos that you could choose, a particular favourite is Bachelorette.

Directed by Eternal Sunshine of the Spotless Mind’s Michel Gondry, Bachelorette is a succession from previous characters in music videos such as Isobel and Human Behaviour, seeing the “Isobel” character head off into the city after finding a self-writing book that dictates her life. Falling in love with a publisher, the book becomes a success and is soon developed into a musical.

Not only is the song fantastic, a poetic and great depiction of love and loss, but Gondry’s visuals fit into incredibly well. Taking a surrealist tone and stage setting as the Bachelorette repeats her situations that get smaller and smaller as the film progresses, Gondry astutely captures the spirit of the song whilst also conveying the claustrophobia of losing love. Drenched in wonderful colour that spring to life when the “Isobel in the woods” comes out of her black and white settings, the video greatly comes into vivid life. As the world becomes bigger, it’s clear the Bachelorette feels as though she is losing herself and Gondry cleverly creates this wonderful visual piece to match Bjork’s evocative song.

It’s one of many examples of making a short film out of a music video.