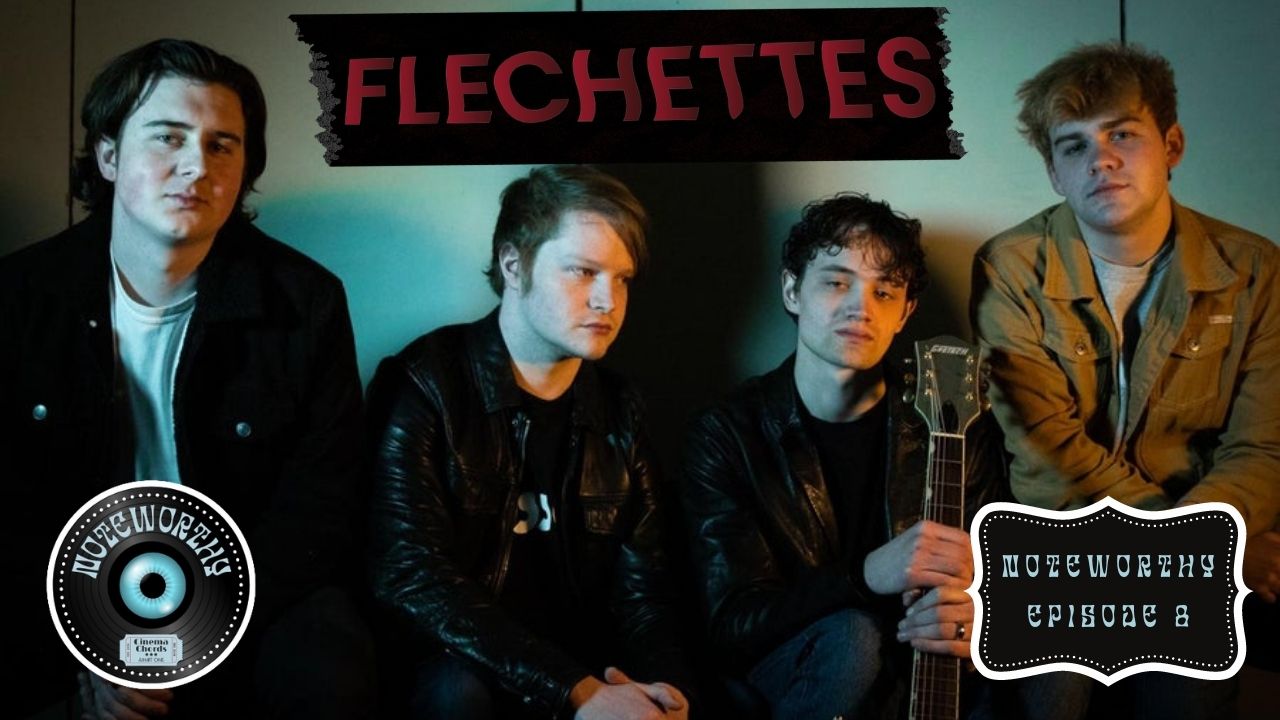 We’re here to help ease you into the week again with CinemaChords’ “Noteworthy”, our weekly video interview series showcasing bands and musicians we’re will be making major strides in the coming months. For Episode #8 we welcome Jack Heaton, lead singer/guitarist of Wigan 4-piece, Flechettes.

Already armed with a plethora of raucous, anthemic indie numbers, it’s hard to believe that Flechettes only formed in 2019. Made up of Jack Heaton (vocals, guitars), Johnny Raper (guitars), Will Watts (bass), and Nicky Kitts (drums), the band wisely adopted a prolific rotation songwriting plan between the four of them so as to constantly up their game and give each new song its own distinct vibe. This initiative, buoyed by a string of gigs on the northern circuit, saw them rapidly amassing a fan following on the local scene.

And, despite all the stumbling blocks the coronavirus pandemic threw in the band’s way, the four-piece soldiered on, gaining an even stronger following online, on the strength of their subsequent releases, “Chasing Youth”, “Man of the Hour” and the debut EP “Ink and Gold”, all of which received regular airplay on the likes of BBC Introducing and Radio X. But this was just the start as their aforementioned versatility and variety soon sparked much wider attention when they were played on the US radio show ‘Rodney on the Rock’ on SiriusXM, as well as on radio stations as far away as Ecuador and South Africa. As a result of the international coverage, just two years after having formed, the band signed to LA-Based indie label SoundX3 records, releasing their latest track “Make Your Mistakes” via SX3 (published by Symphonic distribution and The Orchard) – marking the start of what they call their “heavier and harder Queens of the Stone Age-esque” era.

In anticipation of what the future holds for Flechette’s, CinemaChords’ Howard Gorman caught up with Heaton to discuss adapting to lockdown, getting signed to an LA-based indie label, and what we can expect from them in the coming months in terms of live gigs and new releases.