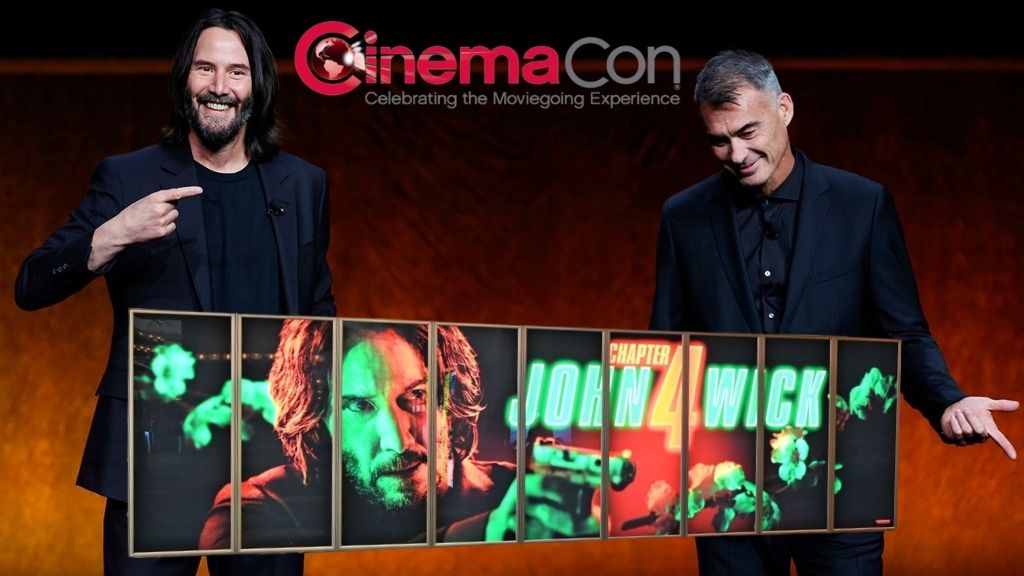 Lionsgate Chairman, Joe Drake got the ball rolling with a reminder of the franchise’s origins and overnight success: “Chad, as you might know, was a stuntman first. It’s rare that people go from driving off cliffs to sitting in the director’s chair… Usually, it’s the other way around.”

With Lionsgate having previously worked with Stahelski on The Expendables in 2010, the filmmaker’s unique approach to stunt work convinced the studio to get behind the visionary filmmaker for the Wick franchise: “That Chad’s vision coupled with Keanu’s singular screen presence would rewrite the action genre. And that bet paid off for everybody,” Drake added, before reminding exhibitors that, “Shepherded by Chad in the director’s chair, and the Baba Yaga himself, these incredible filmmakers continue to subvert genre conventions and defy audience expectations. More lore. More inventiveness. Exquisite locations. From the Roman Catacombs, to Halle Berry shooting her way out of Casablanca. From John killing a 7-foot-tall hitman with a library book to horses galloping across the endless sweeping dunes of the Jordan desert … That’s how John Wick became more than a beloved franchise — a singular experience and a cultural phenomenon. An original story with no pre-existing fanbase that made it to the big screen, bringing audiences rushing back to the theater for a fourth time.”

Reeves also got all nostalgWick (sorry, couldn’t help myself) when he took to the stage, reminiscing about when he first joined forces with Stahelski, to emphasize exactly what it is he feels makes this action franchise so unique in such a crowded genre: “I first met you, Chad, when we were doing The Matrix in 1998. I think that’s the movie where we forged the fire of our creative bond through the Wachowski school of cinema and storytelling. It’s been an honor to build these stories with you … The John Wick franchise is a celebration of fight choreography, balletic action, and storytelling that can only happen through movement.”

Aside from the first-look teaser, Lionsgate also confirmed something that fans of the franchise had been waiting to hear with bated breath. News had previously surfaced regarding Ana de Armas’ talks to star in the John Wick spin-off, Ballerina, and Lionsgate finally confirmed that a deal had been secured with the Knives Out and No Time To Die star to bring back her character who made a small appearance in John Wick: Chapter 3 – Parabellum as a young ballerina who was training to become an assassin.

Set in a universe that also has the prequel series “The Continental” on the way, Len Wiseman (Underworld) is already attached to direct, from a script written by Shay Hatten (‘John Wick 3’, ‘Army of the Dead’), Ballerina will follow a young female assassin (de Armas) who seeks revenge on those who killed her family. The film will be produced by Stahelski, Basil Iwanyk and Erica Lee and is scheduled to enter principal photography this Summer. Based on her recent brief but jaw-dropping bad-ass role as Paloma alongside Daniel Craig in his last outing as James Bond, this is sure to be a perfect offshoot from the Wick franchise.

Commenting on the spinoff, and Wiseman’s attachment to helm the project, Stahelski said: “Having him [Wiseman] on board and approaching some of the action design from a slightly different perspective, meaning the set pieces, the character involvement, how and what he wants to do during the action sequences, makes it kind of fresh … I plan to be there to assist whenever I can. And our 87eleven stunt team will be very actively involved in helping Len in all his action needs.”

Whilst a Ballerina release date has yet to be confirmed, John Wick: Chapter 4 is slated for a March 24, 2023 theatrical release date. That’s still a lengthy wait ahead of us but we’re sure it’ll be more than worth it. For now, though, we’ll leave you with a post-event video of Reeves and Stahelski who are clearly just as impatient as us for everyone to see what the new installment has in store.