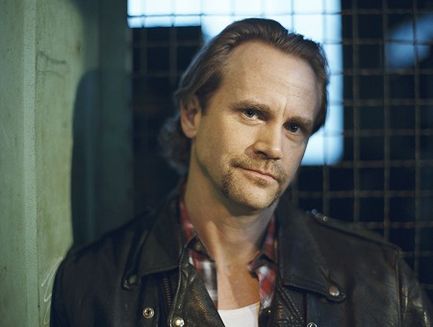 Many of you will be familiar with actor Lee Tergesen be it his portrayal of Tobias Beecher in the hit series Oz or the infamous Terry in the Wayne’s World franchise. Fast forward to the present and Lee can be found playing Hoag, the leader of a ruthless criminal gang in the horror film No One Lives. Directed by Ryuhei Kitamura (The Midnight Meat Train) and starring Luke Evans, the film premiered at the Toronto International Film Festival’s Midnight Madness series and was shot in mid-June back in 2011 in and around a ver hot New Orleans.

As the film heads to UK cinemas today we spoke to Lee all about his experiences on the set of the movie and what motivated him to take on the role.

So I have to ask this first. Another horror movie! I’m not complaining in any way as I love them myself too. Most recently you’ve been in The Collection, and The Texas Chainsaw Massacre: The Beginning. Obviously that’s not all you do but what lies behind your penchant for horror movies?

Well, this time it was actually my wife who was to blame. She is Japanese and when she heard that Ryuhei Kitamura was directing a film she said it would be so cool if I worked with him. I had seen his previous movie, Midnight Meat Train, and I really liked the script when I read it.

Basically they sent me the script and, for some reason or other, nothing happened for a while. Then out of the blue they came back to me asking if I wanted the part. At first I wasn’t totally sure about doing it as it was right before my wife and I were going to get married in Kyoto so I was nervous about the timing of the whole thing but they worked it all out and I ended up heading over to Louisiana for a month.

Your part in the movie is Hoag who is kind of like the leader of this band of rogues. Was this the part you originally read for?

Yes they came to me directly with that part. At that stage I think Luke Evans had been chosen for his part. Working with Luke was just WOW and I’m a really big fan of his.

One of the biggest draws to this film is definitely the elaborate death scenes. Some are pretty hardcore. Did you find it all pretty over the top or are you used to these kinds of things now after having starred in so many graphic scenes. Your recent film The Collection springs to mind as that had some of the strongest gore scenes I have seen in a long time.

Well, I mean, in the series Oz I shit in somebody’s mouth so after that it’s difficult to really consider anything else as going too far.

You mentioned Luke Evans. What kind of relationship did you have with the cast and crew. I know George Murdoch was really enthusiastic to meet you as he is a massive fan of Wayne’s World.

Oh it was great although it was hot as hell. It was funny with George because when you first see him you think “Oh boy!” but he is actually a really smart guy. He’s really sweet and the exact opposite of what you think is going to come out of him.

And would you say you picked up any valuable acting methods from any of your co-stars?

Well Luke and I seem to work in a very similar way. He doesn’t mess around too much. I guess it’s really just something you can just turn on and turn off though.

A lot of critics have said the film is great for guys to take their girlfriends to as it combines violence with an intriguing love story.

Well it’s a pretty fucked up relationship but yes. I think what was so good for the director was that it was so character driven and there was this opportunity to dig into the characters and include all these great visuals.

Talking of visuals, were most of the death scenes actually filmed on set using the actors as much as possible?

Well, from my own experience I had one specific scene where I had to stay upside down for ages over a wood chipper. I mean, you can imagine what happens to the body hanging like that with the takes going on forever. Having said that though the crew made sure that the whole thing was as painless as ever.

So are you all for doing as much of your own stunt work as possible or are you less of a risk taker than you come across in the movies?

Actually I really do like to do as much of it as I can. It’s something I started back in Oz where people did their own stunts. Having said that, the older I get the harder it is for me to bounce back.

Speaking of Oz, you have recently played Mike Tomlin in another television show, Red Widow, that also starred Radha Mitchell and Luke Goss. I really enjoyed that show and it’s a real shame it ended up getting cancelled so early down the road.

Yeah that show was a blast. It’s been such a weird year for television though. Radha Mitchell was so good in that show and playing that role. She’s just so fucking tough. She’s so funny and so sprite and just gets into the scene.

The drag of this show was that it was on network really. I think it should have been on AMC or something like that and they probably should have made it like 10% more edgy.

So what have you got in store now then?

Well I recently spent one and a half months in Japan with my wife and daughter and the truth is it gets complicated with a family. When I got back I had four or five days before I had to go to Seattle and I was looking forward to that as I thought it would be great to have a few days home alone – nice and quiet.

Basically, I immediately slipped into a mild depression which I did not expect. All of a sudden you’re not having that human contact, holding your daughter, changing her diapers or whatever. So, when I was alone it turns out I don’t like me all that much as I hated being alone with myself. But yeah, it’s going to be tricky but I have a few things going on. First a play called Rapture, Blister, Burn now for two months. My wife is actually an arts therapist and she works at a lock up for the criminally insane so she’s been on a break for six months but now has to decide if she wants to go back to work or not. Depending on her decision she will accompany on my projects. I was very realistic when it came to having kids but what I wasn’t aware of was what it was going to be like making decisions like these.

And apart from the theatre work I believe you’ve recently put the finishing touches to a film called Desert Cathedral that involves a pretty unique filming technique. 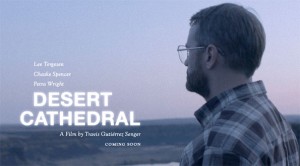 That’s right. We finished shooting that just recently. It’s based on the true story of a guy who left his family in 1992 and took a road trip and sent video tapes back. In the last couple of months the mother of the family decided that she wanted to allow us to use the real video tapes in our film. What we are doing now is weaving his tapes together with the footage we have shot because I do actually look a lot like him.

We’ll start with some footage of him and later use scenes with me. Also there are some scenes which feature my wife and daughter watching video tapes at home and I think they are going to use the video tapes of them watching things as though they are watching videos of the past to help cheer themselves up. I think it should be pretty effective.

Apart from that there aren’t really any other projects on the go, so to speak. I did a couple of episodes of the series Copper. That was a blast too. I played a great criminal mastermind and that was also with Tom Fontana who also produced Oz.

You keep to-ing and fro-ing between television and film. Which one would you say you feel more comfortable doing?

Well I love TV and I’ve been fortunate enough to be on a couple of shows that went on a long time. With those you get to develop a relationship and it starts to feel like you actually have a real job. With film and theatre work it’s a case of being on a job for a couple of months or three and then you are out.

Having said that though, there is nothing like theatre. The play I am doing is one I also did last summer with Amy Brenneman and it’s just great and so much fun. It’s such a terrifying and exhilarating experience.

We’d like to thank Lee for taking a moment out of his schedule to speak to us. We’ll leave you with the red band trailer for No One Lives where you can see that very wood chipper Lee Mentioned above.

In this article:No One Lives